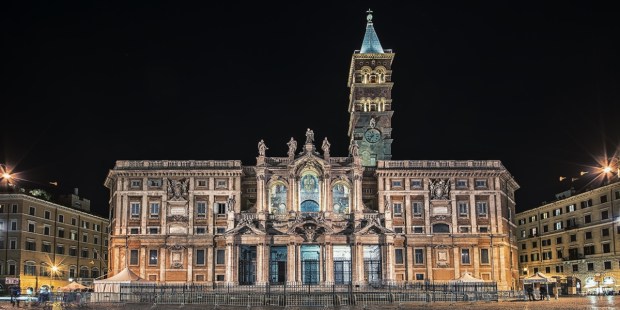 Even the pope likes to pop in, and does so regularly.

One of only four major basilicas and seven papal basilicas in the world, Rome’s Basilica of Saint Mary Major holds a privileged place among churches. It starts with a miracle from the very beginning.

According to legend, a childless couple wished to leave their wealth to the Church and wanted a sign from God indicating what sort of mission they should invest in. Our Lady appeared in a dream to both the couple and to Pope Liberius, indicating that she wanted a church built in her honor on the Esquiline Hill. The location would be made known to them by a miraculous snowfall.

On August 5, a hot summer day, the Esquiline Hill was covered in snow. This confirmed the location for the church, which was built soon afterwards. The original church was rebuilt and enlarged by Pope Sixtus III in the 5th century, and has been restored a number of times since then.

The basilica has a number of attractions, including relics of the Holy Crib and what might be the oldest mosaic cycle from ancient Rome still in existence. The mosaics line the central nave and triumphal arch of the basilica, and depict images from the Old Testament, as well as from the lives of Jesus and Mary.

Saint Mary Major is most known, however, as the largest Marian shrine in Rome. Pope Francis went to the basilica the day after he was elected supreme pontiff, and has made a custom of visiting the church before and after his apostolic trips, entrusting his journeys to the care of the Salus Populi Romani.

This icon of Mary, Protectress of the Roman People, is one of a number of Marian pictures sometimes associated with St. Luke, who allegedly painted one or more portraits of the Blessed Mother during the years she lived with St. John after the death of the Lord. The image has verifiably been in the basilica since the 13th century; according to oral tradition it has probably been there much longer. Remnants of paint under the current image indicate that the top layer we now view was painted over an earlier image in order to preserve it. It is therefore likely that what we venerate today is a medieval restoration of a much earlier image.

The Pontificale Romanum (a liturgical book with rites to be performed by the bishops) refers to a Marian image associated with the basilica from the time of Liberius:

“The Liberian basilica, today called Saint Mary Major, was founded by Pope Liberius (352-366) and was restored and enlarged by Sixtus III. (…) Pope Liberius selected a venerated picture that hung in the pontifical oratory. It had allegedly been brought to Rome by St. Helena.”

If the image referenced in the Pontificale Romanum is the same Salus Populi Romani, then the icon does indeed date back to antiquity.

Read more:
What happened to the True Cross of Christ?

Both the Salus Populi Romani and the Ave Regina Pacis, and the entire basilica of Saint Mary Major, stand as a constant reminder of Mary’s faithful presence in the Church, as Mother, as Protectress, and as one who is always pointing us toward the Lord. As Pope Francis said so eloquently in a recent visit to the basilica:

The Mother is not an “extra,” something optional; she is Christ’s witness. And we need her as a traveler needs refreshment, as a small child needs to be carried in one’s arms. There is great danger for the faith if we live without our Mother, without her protection, allowing ourselves to be carried along by life like leaves by the wind. The Lord knows this, and recommends that we welcome his Mother. This is not a question of spiritual etiquette, but is needed for us to live. Loving her is not a poem; it is a question of being alive. For without a Mother we cannot be sons and daughters. And before all else, we are sons and daughters, beloved sons and daughters, who have God as Father and Our Lady as Mother.

Salus Populi Romani and Ave Regina Pacis, pray for us!