The biblical traditions of Israeli cuisine brought to the 21st century 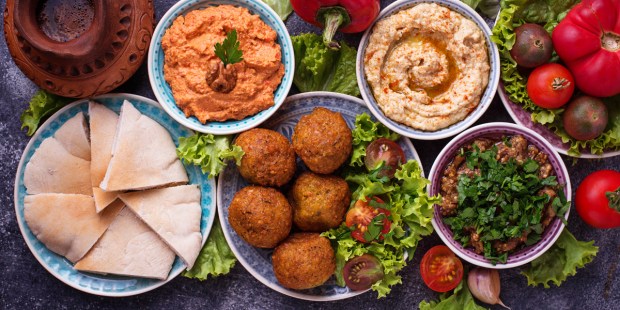 The Jewish people find their cultural identity by tracing their ancient dietary traditions.

Israeli cuisine has experienced a surge in international demand in recent years, popularizing foods like hummus, falafel, and stuffed grape leaves. However, amidst debates as to which culture is responsible for which dish, Israeli chefs and food scholars are faced with the daunting task of determining what makes Israeli cuisine Israeli.

Israel’s foremost food archaeologist Tova Dickstein has been working to settle these debates since the 1990s. At the nature reserve known as Neot Kedumim, she cultivates ingredients of the millennia-old diet that can be traced all the way back to the Bible. There, Dickstein offers biblical nature tours, which examine the many wild vegetables and herbs that served as primary ingredients of the Hebrew diet for thousands of years. She also runs a Bible cooking workshop, in which she teaches people to make these ancient dishes using the original tools and methods.

“The ancient culture was, for a long time, forgotten in Israel,” Dickstein told BBC. “When I first started, Israelis didn’t want to talk about [biblical food] because they saw it as a religious thing,” she continued, referring to the tensions between the secular Israelis and the ultra orthodox minority who seek to limit the import of foods that are not Kosher.

Dickstein believes that exploring biblical food with deep connections to the Israeli ecosystem could offer the Jewish people another outlet to explore their rich and complex history. “Like the poet says, ‘Man is nothing without his native landscape,’” she said, quoting one of Israel’s most celebrated poets, Shaul Tchernichovsky.

BBC explains that due to the connection between Israeli diet and culture, the people are very protective of their dishes, even among their own people. When waves of their biblical Israeli ancestors returned to the Israel after WWII, European-Jewish foods, like gefilte fish carp patties, were disparaged as “diasporic.”

“In the beginning, there was this desire for erasure of the 2,000 years in which the Jews had been in exile,” Dicktein commented. She went on to explain that, while hummus in its current form is often associated with modern Israel, it was most likely popularized during the Crusader Period (1099-1291). In her opinion correcting this anachronism is important to demonstrate the evolution of the Israeli eating habits.

To illustrate this evolution, Dickstein cites the biblical recipe for “Ezekiel bread,” which is a rare example of a recipe in the Bible:

There, God instructs the Hebrew prophet Ezekiel: “Take you also to you wheat, and barley, and beans, and lentils, and millet, and fitches, and put them in one vessel, and make you bread thereof …”

While today “Ezekiel bread” is sold around the world as a sort of super-food, Dickstein believes that this recipe was never meant to produce bread, but rather a dish of fava beans, millet and nutrient-rich seeds. She explained that the word for “bread” in biblical Hebrew translates to “hearty stew.”

She explained that a trip to Crete confirmed her hypothesis as she found a dish called “palikaria,” which is made of the same ingredients and is a staple of Lenten diets.

Dickstein is not the only one trying to revive the ancient food traditions of Israel. Moshe Basson, an Israeli chef who migrated from Iraq in the 1950s, runs an Israeli-style restaurant called The Eucalyptus. There he serves a “modern interpretation of biblical cuisine,” which he cultivated over a lifetime of cooking recipes from his Iraqi grandmother as well his Palestinian and Mediterranean neighbors. Among these very different cultures, he has found many similarities in their cooking styles.

The BBC gives us the history behind some of the dishes at The Eucalyptus:

Among Eucalyptus’ signature dishes is the siege-era mallow, in reference to the role of the wild leafy green during the 1948 Israeli-Palestinian battle for Jerusalem, when the city was under siege and food supplies were so low that Israelis had no choice but to eat the iron-rich plant. Such vegetables were once considered weeds and the domain of Palestinian traditional kitchens, he says, but have gained new prominence as Israeli cuisine has found its footing in recent years by looking toward its own ancient roots.

Basson says that Israeli cuisine is less about recipes than it is about psychologically unpacking and reliving memories. “The people who come to my restaurant are coming to remember their different lives,” he told BBC.

This move to a more biblical diet has only become popular in the last two decades. Previously European-trained chefs had dominated the Israeli palate. Amos Sion, an Israeli chef at the Helena Restaurant in Caesarea, commented about this change:

“Once, chefs tried to replicate French cooking, but there was always this feeling of searching,” said Sion, who trained in France … “Israeli cuisine is still in its infancy. Maybe in another 40 years we’ll have something to call ‘Israeli cuisine.’”

Dickstein has noticed an increase in the number of applicants for her biblical cooking workshop, as more Israelis seek to identify their cultural roots by exploring traditional flavors of the region.

“For the first time, we’ve started to understand that what we eat is from our ancient past, but it’s also from what exists today or what will exist in the future,” Dickstein said. “We have a role to play here that’s not about just eating, but in understanding this land that nourishes us.”