On entering the Church: When a friend becomes family 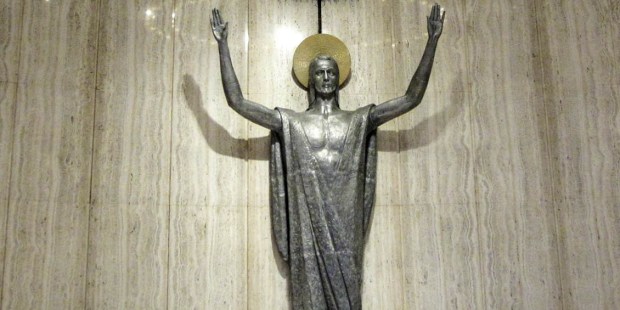 What I saw Sunday afternoon in New York City …

On Sunday afternoon at the Church of the Holy Family in New York City near the United Nations, my young friend Barbara stood in front of a priest. She stood by herself except for a nun, her sponsor, standing at her side and slightly behind her.

The priest, the nun, and my friend made a small island in the wide space in front of the altar. At the center was the small young woman in a long flowered skirt that was, like her, restrained and festive. Barbara had invited her friends to see her change her life.

She said, “I believe and profess all that the holy Catholic Church believes, teaches, and proclaims to be revealed by God.” The priest then confirmed her and she returned to her seat and the Mass went on.

I had forgotten how intensely moving it is to watch a beloved friend enter the Church. It never gets old. It never feels routine. It always feels like a birth or a marriage. Nearly every Catholic with whom I’ve shared the experience feels like this.

We want our friends inside with us, to share something at the center of our lives. That’s part of what moves us. But not the only thing. We want them inside the Church for their own good.

Of course the Church speaks with affection and respect for other Christians. She goes as far as she can to see them as united with us in what St. John Paul II called “a certain, though imperfect communion.” The priest spoke of receiving Barbara into “full communion,” because as a Protestant Christian she had been half-way home.

Not all the way home, though. Our Christian friends may be saintly, they may be much better Christians than we are, but we want them inside the Church. It’s not nothing to be a Catholic.

The Catechism of the Catholic Church explains this when describing confirmation.

Confirmation into the Church brings us “an increase and deepening of baptismal grace.” This “roots us more deeply in the divine filiation which makes us cry, ‘Abba! Father!’; it unites us more firmly to Christ; it increases the gifts of the Holy Spirit in us; it renders our bond with the Church more perfect; it gives us a special strength of the Holy Spirit to spread and defend the faith by word and action as true witnesses of Christ, to confess the name of Christ boldly, and never to be ashamed of the Cross.”

As I say, not nothing. That’s what my friend got from the Church on Sunday afternoon.

Read more:
How my son’s wedding showed me that ‘one, holy, catholic and apostolic’ perfectly describes the Church

When Barbara said those words, “I believe and profess,” I suddenly had tears in my eyes. Not something that happens to me very often, but something very big had just happened to someone I care about. I can’t describe the feeling in ways that don’t sound sentimental and clichéd, and triumphalist too, so I won’t try.

The Church had just given her a great gift. The priest had handed her the keys to her new home and the tools that could make her the person she would not be without them. When we see that, we feel about the Church the way we’d feel about a doctor who’d helped our friend see or walk.

I felt, and I think everyone else there did as well, that our friend is now not just a good friend but part of the family. We share something crucial we didn’t share before, something deeper than friendship, something permanent. It can be variously described not just as a family, but as a solidarity, and a secret, as a heritage and a mission.

From the outside, I know, entering the Catholic Church looks more like switching membership from Sam’s Club to Costco. The metaphors I just used sound silly, as if someone claimed that moving to a new apartment two floors down cured him of cancer, or insisted that moving to a new home gave him super-powers. Friends who have asked me about conversion have rolled their eyes, or smiled at me as if I were a 15-year-old boy besotted with a girl in his class. I completely understand that.

But from the inside, that’s the way it feels. It’s intensely moving because we know the reality into which our friends enter.

Thank you, Barbara, and welcome.

Read more:
How I pray the Rosary with my friends (the saints)