5 Ways to strengthen your son’s relationship with his dad 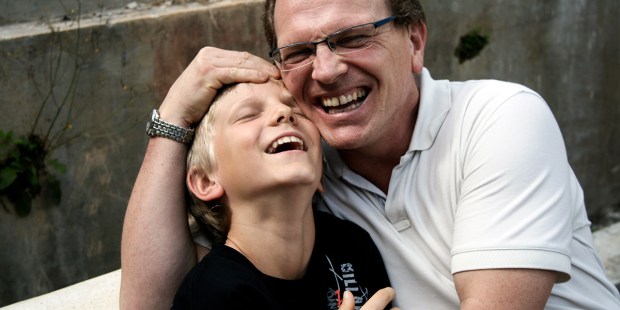 Nothing replaces a father in a child’s life — here’s how to foster that all important bond.

Before I had children of my own, a woman told me that she thought her job as a mother to a son was to help him become a good man, capable of being loving husband and father. I always remembered it, especially as all three of my children are boys. I pray for my possible future daughters-in-law. In fact, I keep them in mind especially when I’m trying to break one of my sons of an annoying habit (i.e. leaving wet towels on the bathroom floor) and tease them that their wives will thank me for fixing the “problem” now.

But this job isn’t mine alone. Creating a home and a lifestyle where my boys can see the behaviors of their dad modeled for them is the ultimate way to raise them to be good men, and not only witness his actions but to participate alongside him. Here are some of the ways we facilitate that special father-son relationship …

Our boys are separated in age just enough that it’s sometimes a little tricky finding an activity they can all enjoy together. Enter Swamp People. It’s not a “baby show” that will bore my teenager. It features wild animals and guns, which appeal to my little boys. And, well, all of the above is good fun as far as their father is concerned. (I seize the opportunity and disappear for some alone time.)

Along with some good cuddle time on the couch, my husband uses the show as an opportunity to teach the boys responsible stewardship of the natural world. He takes his time explaining that we hunt and then eat the animals, and don’t engage in killing for killing’s sake. This lesson took hold of one of my son’s a little more tightly than expected: he wanted us to eat the mouse we hoped to catch in a mouse trap. (We were, thankfully, unsuccessful in our efforts.)

As entertaining as the show is, the couch potatoes soon grow restless and the chilled-out time with Netflix soon turns into raucous pretend-play, where the sofa is a boat and they’re surrounded by alligators. Even the teenager forgets he’s too cool to join in the fun.

Admitting you’ve made a mistake or acted wrongly is tough. My husband makes a point of apologizing to the boys when he has been testy or impatient with them. He goes a step further and asks for their help to be better in the future. Showing vulnerability and humility, and taking responsibility, teaches them to own their actions, even their bad ones and mistakes. It also makes it clear that everyone makes mistakes sometimes and that it’s okay to apologize and ask for help moving forward — and that it’s especially okay to do so with your father.

I’ve seen this behavior emulated in our sons who are growing to understand that this is a sign of strength, not weakness. My husband also makes sure to pray in front of our boys and with them, even teaching them good prayers to pray when facing a specific dilemma, asking the angels and saints to pray with us and for us for God’s help and guidance.

And speaking of strength …

Being champions of the defenseless

There’s a lot of father-son talk in our house about protecting the weak, standing up for the powerless, and rooting for the underdog. Especially in a school situation, it’s crucial to stand by and protect the vulnerable kid from things like teasing and bullying. It’s never okay to get laughs at another’s expense, especially if you do this to deflect negative attention from yourself. Use your strength to defend others rather than advance your own interests. Go further and help those who make you feel a little uncomfortable. For example, there’s a house nearby where several mentally ill women live together. They are very dependent upon help from others, and with children it’s not always easy to help them, especially because the women can sometimes behave erratically. When one of them asked for a ride to a crafts fair where she intended to sell some of her art (a major feat on her part), my husband didn’t hesitate to say yes, bringing our son along to help.

Sometimes we crave the company of our own sex. Believe me, as the only lady in the house, I understand. Not always (Dad needs a break, too), but often enough my husband will include our boys in an activity he’s doing with his male friends. This gives our boys a vision of what adult friendship can look like, and allows them to spend time with other men besides their father and teachers.

I’m especially thankful for the priests in my husband’s circle of friends. It’s very easy for a child to think of the priest as, well, different. Especially when you only see him only once a week at Mass. Spending time joking, throwing the football, eating “guy food,” or cleaning out the garage with Dad’s priest friends humanizes the vocation, and keeps my sons’ heads and hearts open to the possibility that they might have a religious vocation of their own.

My husband is a hugger. Me? Not so much. But of course, as mom, I have boy barnacles stuck to me pretty much all the time and I (mostly) love it. My husband expresses his love and affection for the boys both with hugs and kisses, and with loving words of praise often and a lot. The special thing about his praise is that instead of only focusing on achievements, he acknowledges the efforts made in pursuit of goals. They can feel proud even when they don’t win, or get the highest grade, but because of their father’s praise of their effort, and not just showing up or participating, they learn that there is value in trying things at which they may not easily succeed, that there is value in those pursuits, and Dad will be waiting for them with a big hug.

My husband also makes sure to show me affection around the boys and models the right ways to treat women. He makes sure they see me as a whole person and not just somebody who pours glasses of milk and helps them find their lost toys. Seeing us happy and in love will might make them roll their eyes, sure, but it gives them a deep sense of security that their parents love each other and can be depended upon. They see that a man’s job is to be a good man and to love his wife and children with everything he has.