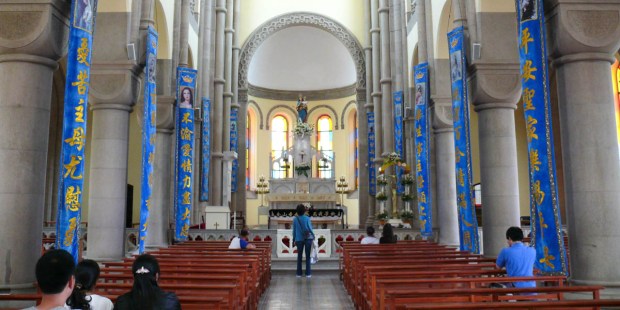 Our Lady of Sheshan calls us to pray for peace, and especially for the Church in China.

Shanghai is a very important city located on China’s east coast. It is home to a large international community and a Chinese Catholic culture that can be traced to the 1600s. At the time, the city was port of entry for missionaries entering China, and it was also the depot for them to gather supplies from home.

In 1863, the Superior of the Jesuit community in Shanghai, Father Gu Zhen Sheng, was able to purchase a portion of the Sheshan Mountain overlooking a magnificent bamboo forest. A chapel was built on the site, and a retreat house was erected next to it.

The Taiping Rebellion was still in full force and Father Gu went up to the mountaintop and prayed to the Blessed Mother. He prayed saying, “If the diocese is saved from the attack of the rebels, we will build a basilica in thanksgiving for Our Lady’s special protection.”

The hostilities ended the next year, and just four years later, on March 1, 1868, the Bishop of Shanghai, Adrien Languillat, SJ, consecrated and dedicated the chapel to Our Lady Help of Christians of Sheshan. The image of Our Lady was taken from the “Mary Help of Christians” painting located in France. The new Shrine of Our Lady had begun to take shape.

In September 1870, Fr. Gu told the people of his prayers to the Blessed Mother and how he had promised to build her new church in thanksgiving for her protection. He asked the Catholic people for donations and for helping in building a new church. His pleas were heard and on May 24, 1871, the feast of Our Lady Help of Christians, Bishop Languillat presided over the laying of the cornerstone of the new church.

On April 15, 1873, the new basilica “on the mountaintop” was consecrated by Bishop Languillat.

Ever since then Our Lady of Sheshan has been considered the special protector of the Shanghai Diocese and of China. In 1874, Pope Pius IX granted an indulgence to all pilgrims who completed the pilgrimage to the Shrine during the month of May.

Things continued to develop, and in 1894, Catholics built the Church of Zhong Shan (meaning, “in the middle of the mountain”) and dedicated it to Our Lady as Mediatrix. That was followed by three chapels: one dedicated to the Virgin Mary, another to St. Joseph, and the last to the Sacred Heart of Jesus.

Read more:
This shrine and monastery were built around an image of Our Lady that didn’t want to move

On the door of the church itself, two Chinese proverbs were inscribed: “Rest a while by the small chapel half-way up the hill and offer your filial homage. Climb a few more steps and implore the mercies of the Mother of God.”

The modern-day shrine dedicated to Our Lady Help of Christians of Sheshan was constructed and dedicated in April 2000.

The Basilica of Our Lady of Sheshan can hold more than 3,000 people and is the first basilica in eastern Asia. The original image is currently enshrined in the National Shrine and Minor Basilica of Our Lady of Sheshan, in Shanghai. There is also a remake of the original statue. This one has Mary standing erect and holding the Child Jesus above her head. At the base is a dragon with a trident tail, being crushed by the Madonna.

To this day, every May 24, the basilica welcomes great throngs of people, not only from China but from other countries around the world.

In 2007, in a letter to the faithful of China, Pope Benedict XVI established her feast day as a World Day of Prayer for the Church in China.

Our Lady of Sheshan, please pray for us.