Exploiting your workers is a mortal sin, pope warns 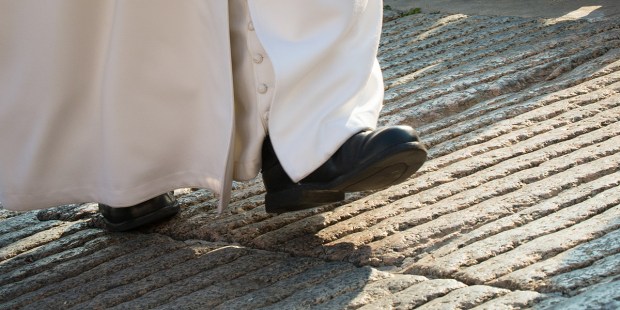 Pope Francis today had harsh words for those who exploit their workers, saying during his homily at Casa Santa Marta that failing to pay employees what they deserve can be a mortal sin.

Drawing from the even harsher words of St. James in the First Reading, the pope said that priests need to preach on riches and poverty.

Come now, you rich, weep and wail over your impending miseries.
Your wealth has rotted away, your clothes have become moth-eaten,
your gold and silver have corroded,
and that corrosion will be a testimony against you;
it will devour your flesh like a fire.
You have stored up treasure for the last days.
Behold, the wages you withheld from the workers
who harvested your fields are crying aloud;
and the cries of the harvesters
have reached the ears of the Lord of hosts.

The Holy Father said that James’ forceful words were a reminder of what Jesus had taught.

‘Woe to you who are rich.’ If someone today were to preach these words, the media the next day would write: ‘That priest is a communist.’ But poverty is at the center of the Gospel. Preaching about poverty is at the heart of Jesus’ message: ‘Blessed are the poor’ is the first of the Beatitudes. It is the identity card with which Jesus presents himself in the Synagogue when he returns to his town of Nazareth. ‘The Spirit of the Lord is upon me, because he has anointed me to bring glad tidings to the poor.’ But we have historically given in to the weakness of not preaching about poverty, believing it to be a social or political question. No! It is the Gospel, pure and simple.”

The pope said that riches are so dangerous because they are a “sort of idolatry” and have the power to seduce.

He explained that they can lead to breaking both the greatest commandment and the one like unto it: love God above all things, and love neighbor as self.

Riches “capture you and don’t let you observe the first commandment,” which is to love God with your whole heart, Francis said.

Riches, he said, also “go against the second commandment because they destroy the harmonious relationship between people.”

Not a union boss

The Bishop of Rome said that St. James is not a union boss, but simply speaking under the inspiration of the Holy Spirit.

Even here in Italy people are left without a job in order to preserve capital investments. This goes against the second commandment, so: ‘Woe to you’, Jesus warns. Woe to you who exploit others and their work by evading taxes, not contributing to their pension funds, and not giving them paid vacation. Woe to you!… If you don’t pay, your injustice is a mortal sin. You are not in God’s grace. It’s not I who say it, but Jesus and James the Apostle. That’s why riches keep you from observing the second commandment, which is love for your neighbor.

Pope Francis warned that riches can make people slaves, so all should “pray a little more and do penance” for the rich.

You are not free regarding riches. To be free regarding riches you must distance yourself from them and pray to the Lord. If the Lord has given you riches, they are to be given away, in order to do many good things for others in His name. But riches often seduce us, and falling into this seduction, we are made slaves to them.