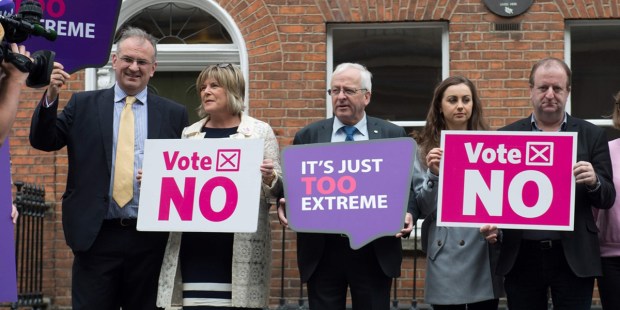 Exit polls are suggesting there was a strong rejection by Irish voters Friday of the 8th Amendment to the Constitution, which assures the equal protection of the life of mother and unborn child.

Such an outcome would give the Irish government the green light to legalize abortion at least in some circumstances.

An exit poll conducted for the Irish Times by Ipsos/MRBI suggested that the Yes vote, to repeal the 8th Amendment, won by 68 percent to 32 percent. And state broadcaster RTÉ, in a separate survey, found Irish voters rejecting the 8th Amendment 69.4 percent to 30.6 percent.

The Irish Times poll found strong support for repeal among residents of Dublin, women, and younger voters, who were overwhelmingly in favor of repeal.

“In the U.K., 8 million children have gone missing since the abortion law was introduced,” he said. “I hope Ireland will not make the same mistake today.”

Official counting of Friday’s vote begins Saturday morning, and an official result will be announced Saturday afternoon. If voters do indeed reject the Eighth Amendment, its current language would be replaced by the phrase: “Provision may be made by law for the regulation of termination of pregnancy,” the New York Times explained:

Draft legislation released before the referendum would allow for relatively unrestricted abortions up until 12 weeks of pregnancy, subject to consultation with a doctor and a short waiting period. Beyond 12 weeks of pregnancy, termination would still be possible — up to 24 weeks — if two doctors determined that a woman’s life was threatened by the pregnancy or that there was serious risk to her health.

Irish citizen Angela McMorrow, in an email to Aleteia Friday night, suggested that the pro-life side was up against a Goliath.

Also contributing to the apparent failure of the pro-life side was the ban on pro-life ads on Google, McMorrow said.

Three years ago, Ireland became the first nation in the world to legalize same-sex marriage by popular vote.