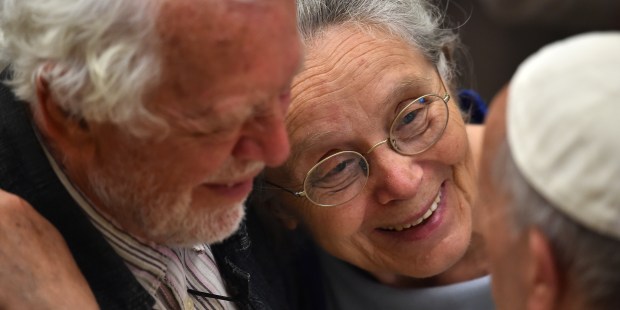 Says that matrimony is a “silent homily,” a “daily homily”

Pope Francis today spoke about the beauty of marriage as a reflection of the trinity, saying that marriage itself is a “silent homily.”

He took up the sacrament of marriage in his morning homily at Casa Santa Marta, where various couples celebrating their 25th and 50th wedding anniversaries were part of the congregation.

The Gospel reading recounted the Pharisees asking Jesus if it is lawful for a man to divorce his wife.

The Pharisees reduce the Christian life, the way of following God, to a question of “yes, you can,” or “no, you can’t.”

But Jesus, said Pope Francis, goes beyond the simple question of lawfulness, going back to the “the beginning.” Jesus speaks about marriage as it is in itself, perhaps the greatest thing created by God in those seven days of Creation.

“From the beginning of creation, God made them male and female. For this reason, a man shall leave his father and mother, and be joined to his wife, and the two shall become one flesh.” Jesus words in the Gospel are very strong, the pope said. He speaks of “one flesh” which cannot be divided. Jesus “lays aside the problem of separation, and goes to the beauty of the couple,” who ought to be one. The pope continued:

We must not focus, like these doctors do, on [the answer] “Yes, you can” divide a marriage, or “No, you can’t.” At times there is misfortune, when it doesn’t work, and it is better to separate in order to avoid a world war. But this is a misfortune. Let us go and look at the positive.

Pope Francis told of how he met a couple who were celebrating 60 years of marriage. He said he asked them, “Are you happy?” They looked at one another, and with tears in their eyes, answered, “We are in love!”

And this is not only a sacrament for them, but also for the Church, a sacrament, as it were, that attracts attention: “See, love is possible!” And love is capable of allowing you to live your whole life “in love”: in joy and in sorrow, with the problems of the children, and their own problems… but always going forward. In sickness and in health, but always going forward. This is beautiful.

Matrimony is an image of God, the pope said, describing it as something very beautiful: “Matrimony is a silent homily for everyone else, a daily homily.”

It’s sad when this is not news: the newspapers, the TV news shows, don’t consider this news. But this couple, together for so many years… it’s not news. Scandal, divorce, separation – these are considered newsworthy. (Although at times its necessary to separate, as I said, to avoid a greater evil). The image of God isn’t news. But this is the beauty of marriage. They [the couple] are the image and likeness of God. And this is our news, the Christian news.

And the most important virtue …

Despite the beauty of this sacrament, marriage and family life is not easy, the pope acknowledged.

He pointed to the first Reading, where St James speaks about patience. Patience, he said, is “perhaps the most important virtue for the couple – both for the man and for the woman.”

He concluded his homily with a prayer that the Lord “might give to the Church and to society a more profound and more beautiful understanding of marriage, so that we all might be able to appreciate and reflect upon [the fact] that the image and likeness of God is present in marriage.”