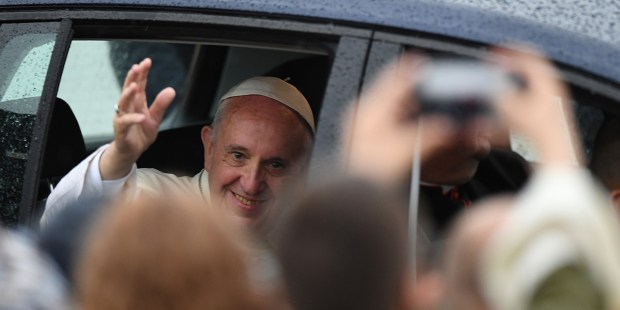 Another “Friday of Mercy” initiative brings pope to southeast of Rome

The institute is a public school at the southeast of Rome, founded in the 50s; it now has various campuses, and has students of various ethnicities and economic situations.

The director of the school, Claudia Gentili, explained to the pope the history of the institute, linked to the Scala family, and in particular, to their young daughter Elisa, who died when she was 11 of leukemia.

Elisa loved to read and so her parents established a reading room/library in her honor. In 2015, “Elisa’s Library” was opened.

This was followed by a campaign, “Give a book to Elisa,” promoted by Giorgio and Maria Scala, the child’s parents. Now the library has some 20,000 books and is part of the city library system.

The Holy Father had an moving encounter with Elisa’s parents, as they presented the results of their efforts and their little daughter’s legacy. The pope spent a few moments with them and donated some books to the library, each with a dedication to little Elisa.

The school children then sang some songs for the pope, who greeted faculty, staff, and parents, and then returned to Casa Santa Marta.

The Fridays of Mercy visits were begun during the Year of Mercy. The Holy Father has visited a number of charitable or other institutions, sometimes showing up unannounced.