The light side of the Force in the Star Wars universe speaks to all people, even Han Solo 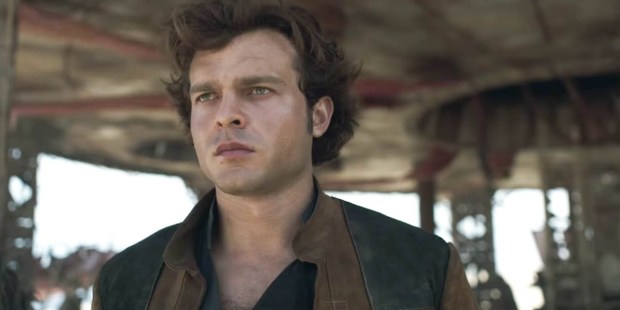 At last, Ron Howard’s second Star Wars movie is upon us. The first, obviously, was 1988’s Willow. Directed by Howard and written and produced by George Lucas, Willow was undeniably a Star Wars episode dressed up in Lord of the Rings clothing. As fun as Willow was, though, it’s nice to see Howard finally get to helm a Star Wars movie with actual space ships and aliens in it. That film is Solo: A Star Wars Story, the latest standalone entry in the franchise.

Like Rogue One before it, Solo takes bits of dialog from previous Star Wars films and expands upon them. If you’ve ever wondered what exactly that Kessel Run thing Han Solo was so proud of was, this movie shows you. Perhaps you wanted to know a little bit more about the circumstances surrounding Han’s disputed acquisition of the Millenium Falcon from Lando Calrissian. That’s here too. Most importantly to fans, it definitively addresses the issue of whether or not Han is the kind of fellow who shoots first or not.

There’s plenty of new material as well. We first meet a young Solo (Alden Ehrenreich) living out an Oliver Twist-like existence on the planet Correllia. There, he and his first love, Qi’ra (Emilia Clarke) commit petty thefts for the benefit of the Lady Proxima, a cross between Twist’s Fagin and the giant cockroach from Men in Black. The pair dream of escaping to the stars, but only Han manages to make good on their getaway plans, vowing to one day secure a ship of his own and return for Qi’ra.

To make good on that promise, Han signs up with the Empire so he can learn to be a pilot. Notoriously bad at taking orders, however, Han finds his military career going south rather quickly. Fortunately, he meets up with a number of characters who will have a lasting impact on his life. Amongst these are Tobias Beckett (Woody Harrelson), a no-nonsense smuggler with a decidedly self-serving philosophy, and a certain seven-foot tall Wookie whom Han helps out of a bind.

Once Tobias is introduced, the film basically becomes a heist movie, beginning with a stand-out set piece in which Han and his new friends attempt to rob a train. Yes, a train. Screenwriter Lawrence Kasdan does love his western motifs after all. One scheme leads to another, eventually drawing the aforementioned Lando (Donald Glover) and his suffragette-minded droid L3-37 (Phoebe Waller-Bridge) into Han’s orbit. With all the players in place, Han and the gang attempt to pull off their biggest caper yet, one that, if successful, will finally get Han that ship he has been after for so long.

As the title character, Alden Ehrenreich does a fine enough job despite being stuck in the same unenviable position as George Lazenby was when he took over the role of James Bond from Sean Connery. No matter how much charm and charisma Ehrenreich pours on, it’s simply not enough to wash away the indelible stamp Harrison Ford put on the character of Solo. Still, once Chewbacca comes charging into the picture, it feels like the Han and Chewie of old, and fans should be pleased.

Unfortunately, for those who have become disillusioned with the direction the Star Wars series has taken of late, there are things in Solo that will continue to disappoint. For the first time in the franchise’s movie history, the story dips into discussing one of the character’s sexual preferences. While spin-off products like the novels and comics have done this plenty, it still feels a little out of place in the movies to be discussing the possibility that one of our heroes may be robo-sexual. Blech.

One of the things the film does right, though, is continue a theme that came to the forefront with the introduction of Ben Solo, aka Kylo Ren, in the main series. While the saga of the Skywalker family has been one of good people tempted by the dark side, the Solos it would seem are men of dubious character who often find themselves “tempted” by the light.

In theological terms, temptation is not the right word, of course. Strictly speaking, temptation is the solicitation to sin. But Kylo’s use of the word tempted to describe the tug of his conscience gets the idea across well enough. And in Solo, we see the same forces (pun intended) at work on his father Han. Much like our real-world God, who is not the passive watchmaker of the Deists, but rather an active personal being who continuously calls to us, the light side of the Force in the Star Wars universe speaks to all people, Jedi or not, urging them to do good even when they would rather just take the money and run.

The movie doesn’t spend too much time dwelling on that, however. Mostly, Solo: A Star Wars Story exists for entertainment, and in that it delivers. Though far from faultless, the film is a fun, action-filled romp through the Star Wars universe. It’s a tad bit overlong, perhaps, but not so much that fans won’t be clamoring for more as the familiar end theme begins. And that’s good, because things happen in the last few minutes of Solo: A Star Wars Story that hint there just may be more Han and Chewie coming in our future.