Was cancelling the Kim-Trump summit a good idea? Experts weigh in 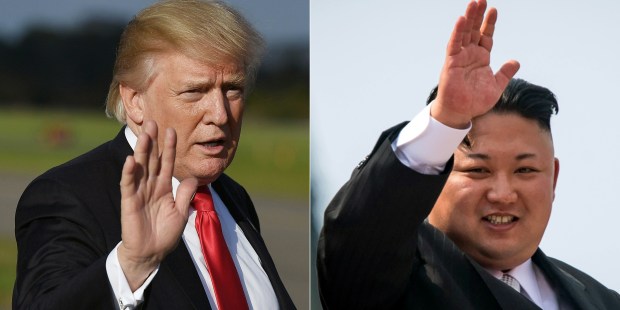 MANDEL NGAN, ED JONES I AFP
(FILES) This file combination photo created on October 1, 2017 shows US President Donald Trump at Morristown, New Jersey, Municipal Airport on September 15, 2017 and North Korean leader Kim Jong-Un waving following a military parade in Pyongyang on April 15, 2017.
Tensions have spiked this year with the North carrying out its sixth atomic test and launching missiles that appear to bring the US mainland within range, and its leader Kim Jong-Un trading threats of war and personal insults with US President Donald Trump. / AFP PHOTO / MANDEL NGAN AND ED JONES
Share
Print
John Burger - published on 05/25/18

Some see risk of military action increasing, while others applaud Trump for sticking to his guns

It was only a few months ago that a mistakenly-sent cell phone alert warning of an “incoming ballistic missile” sent thousands of Hawaiians into a panic. For months, North Korea was testing new nuclear weapons and showing that one of their missiles could reach North America.

And within the past month, most of the world has marveled at an apparent turnaround, and the historic meeting between North and South Korea’s leaders in the Demilitarized Zone. Many looked forward in hope to a June 12 summit between Pyongyang’s Kim Jong-Un and President Donald J. Trump.

So Trump’s letter to the North Korean leader Thursday, which called the summit off because of signs and expressions of North Korean hostility, was a big let-down for many.

United Nations Secretary-General Antonio Guterres said he was “deeply concerned” by the cancellation of the planned meeting. “I urge the parties to continue their dialogue to find a path to a peaceful and verifiable denuclearization of the Korean peninsula.”

South Korean President Moon Jae-In said that the pursuit of peace on the peninsula shouldn’t be abandoned.

But some experts felt it was the right thing to do—for now, at least. Alexander “Sandy” Vershbow, distinguished fellow in the Atlantic Council’s Scowcroft Center for Strategy and Security, served as the US ambassador to South Korea from 2005 to 2008. He said it was wise for Trump to cancel the summit.

“It has been clear from the outset that there is no common understanding of ‘denuclearization’ between the United States and North Korea, even after two Pompeo meetings with Kim Jong-un,” Vershbow said. “Nor is there any sign of agreement on the timeline, conditions and incentives for implementation.” Vershbow said that much more “diplomatic spadework” is needed.

David French of National Review acknowledged that North Korea blew up its nuclear test site. But that was only after the country had successfully tested several nuclear weapons, he said. He believes that North Korea was not about to agree to a complete denuclearization but would make whatever vague concessions it could get away with to gain economic relief and a promise that it would not be the subject of military action.

With the summit cancelled, experts predicted that North Korea will resume its missile testing, and that raises the possibility of a U.S. military response.

“The world is not safer the day after the decision is made not to meet,” Robert Gallucci, the chief U.S. negotiator during the 1994 North Korea nuclear crisis, told the Hill.

For the time being, Trump said the U.S. would continue exerting maximum economic pressure on Kim and his regime, according to Bloomberg.

Just before the news of the cancellation came out, the Vatican’s new diplomat to South Korea summed up the challenge.

“The road is still at an early stage and will certainly be a long one with many obstacles to overcome,” said Archbishop Alfred Xuereb. He said that Pope Francis has invited the entire Church to support the parties concerned to build peace and offer the coming generations a future of harmony and prosperity.