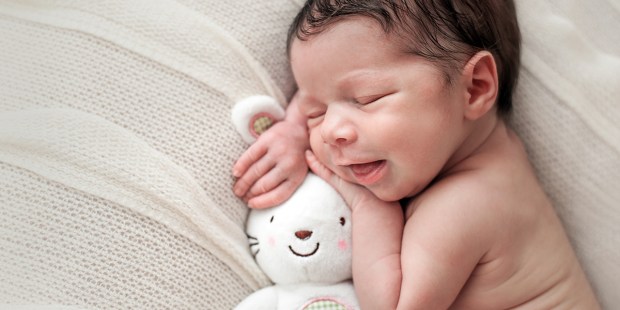 My friends, family — and even I — were absolutely convinced we were having a …

It’s not often that you’re taken completely off guard in a way that delights you whole-heartedly. (Even if you can think back to a really good surprise party someone threw for you, it probably doesn’t happen to you every year, right?) But, seriously, what could be more wonderful than a genuinely good surprise?

Author Ronald Rolheiser reminds, “The opposite of depression is delight, being spontaneously surprised by the goodness and beauty of living.” But this isn’t something most of us can just conjure up and make happen in our lives. It’s something that happens to us.

In my life, I recently decided to add a joyful surprise that I could control: Waiting until delivery to find out each of my baby’s genders. In the process, I realized that true joy can be carried within the mystery of pregnancy.

That said, I don’t judge anyone who chooses to find out their baby’s gender. In our culture today, a great many women find out whether their unborn baby is a boy or girl as soon as they are able; my best friend is one of them. There were times when I wanted to find out, too, and almost decided to. It’s hard to delay that kind of excitement. But, for me personally, it would have been akin to opening my present too soon. So I chose for our first kid, and again for my second, not to find out the gender until birth, accepting the feeling of curiosity that stayed with me all along the way, and the anticipation of eagerly awaiting the surprise that would be just the baby our family needed.

When I was pregnant with my second child, I surprised myself: It was suddenly really difficult to wait for the gender news because it was not my first baby! I found myself extra tempted to peek during the sonogram, and I could think of even more reasons to discover the gender ahead of birth. Plus, the biggest itch began to be everyone else’s curiosity. When it’s your first baby, no one has as big an opinion which gender you “should” have because there’s no precedent.

When I was pregnant with my second child, half my loved ones hoped for the opposite gender so I would have “one of each,” and the other half rooted for the same gender so that the children would be able to be friends in that special way unique to siblings of the same gender when they’re close in age. Meanwhile, I found myself wondering if I should go in the attic to gather all the gender-specific baby clothes I already owned and wash them. Or did I need to go shopping? My nursery would remain sea foam green in either case, I reassured myself. But would I be facing a baby that was somewhat familiar or totally different? It was driving me crazy … and any mother knows that pregnancy is challenging enough as it is!

Like a zen exercise of non-attachment, though, I continued to choose not to know. And as I kept it up, I slowly gave up the illusion of control and practiced patience, almost like a spiritual exercise. (Note: I struggle with patience and like to plan ahead. That’s part of why I knew it was good practice for me.) And the more I didn’t know, the more I realized that it didn’t matter, that my hopes or fears weren’t in the equation at all.

Ultimately, a child is a gift from God and the one who is born will be best for our family. The surrender of not knowing challenged me not to hope for a specific gender, which seems more fair to the child. That is humbling and euphoric. In that light, the conversations I encountered such as, “Are you hoping for a boy this time?” or “Will you finally get your girl?” pale in comparison to the virtue of the mystery. I am hoping to meet the child God has designed, my soul responded, despite all the speculation.

In my case, by my fourth or fifth month, it seemed everyone was convinced of my baby’s gender and that they were all in agreement. One loving family member even brought over a beautiful, lush hydrangea which was the traditional color associated with the gender they expected me to have. We planted it right outside my front door. As I admired it, and listened to my loved ones’ speculation, soon I, too, felt convinced of the baby’s gender. Despite my choosing not to know, I really thought I knew. What folly! It still makes me laugh.

You can imagine my surprise when after a strenuous labor, the doctor declared “It’s a—” and it was the opposite of everyone’s expectation. I almost couldn’t believe it. My husband grinned from ear to ear and I was dumbfounded, sure that I had misheard. Then, as I saw the baby’s face and cuddled the warm, sweet beauty, I met our meant-to-be and felt a shock of incredible delight. Our baby was born on the morning of Jubilate Sunday, the third Sunday after Easter in the Catholic Church in which the Mass begins with the introit: “Jubilate Deo omnis terra,” an invitation to joy in Christ.

I thought of Genesis, when Sarah laughed after being told she would have a child. I still laugh when I think of how certain everyone was of the gender I would have, and how even I thought I would be right in my prediction … and am still so glad I didn’t find out. Born with deep dimples and a huge smile, my surprise is a constant reminder of God’s beautiful and profound humor. This precious child has reminded me of the privilege of letting go; a sacred reason to jubilate, one our family will celebrate with gratitude and humility every Jubilate Sunday to come.

Oh and remember the hydrangea? It turned the opposite color not long after the baby was born. Blue, instead of pink … Or was it pink and not blue?

This article was originally published March 2017.