Pope speaks with Italian bishops about homosexuality in seminaries 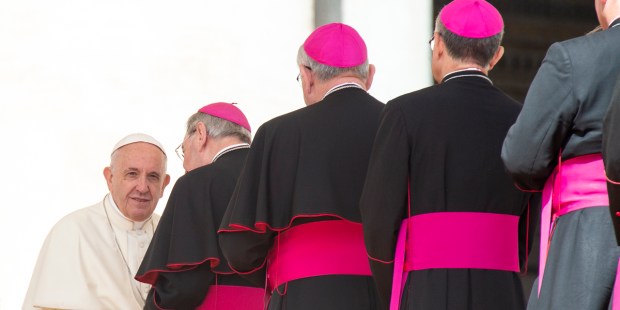 The Italian bishops have raised the issue of homosexuality in Italian seminaries, confirmed Cardinal Gualtiero Bassetti, president of the Italian Episcopal Conference, at a press conference following the bishops’ four-day meetings last week in the Vatican.

The approximately 270 Italian bishops focused during the summit on the decline of vocations, the difficult reorganization of dioceses, and good governance. But also, in a less official way, they discussed the Italian elections and homosexuality in seminaries.

On this last point, it was the pope himself who brought up the issue, according to Vatican Insider, during a discussion lasting more than three hours, behind closed doors, with the Italian bishops in the Synod hall. Addressing the problem of vocations and insisting on “quality rather than quantity,” the pontiff invited prelates to “careful discernment.”

“If you have even a slight doubt [about a candidate’s homosexuality], better not to bring him in,” he said, because the practice of homosexual acts can compromise the life of the seminary.

This instruction is also among the recommendations addressed by the pope to the Chilean bishops, who came to Rome from May 15 to 18. It echoes the ratio fundamentalis governing seminaries, promulgated under Benedict XVI in 2005, and updated by Francis in December 2016.

Titled “The Gift of the Priestly Vocation“, this document reaffirmed in particular that “the Church, while profoundly respecting the persons in question, cannot admit to the seminary or to holy orders those who practice homosexuality, present deep-seated homosexual tendencies, or support the so-called ‘gay culture.’”

Regarding the new Italian government led by Giuseppe Conte, Cardinal Bassetti said that the Church would keep its attitude of “critical consciousness,” as it does in all cases.

The Italian prelates are waiting for the 53-year-old prime minister to provide “proof of maturity and wisdom” to face the country’s problems, he said. The basis of their analysis will be the social doctrine of the Church, including the “essential points” of the family, the dignity of the human person, and the situation of migrants, but also a just salary and a progressive tax system.

The new head of government is the result of a post-election alliance between two “populist” parties: the Five Star Movement and the League. He presents himself as an expert with the desire to “debureaucratize” the country and liberalize the economy, including a flat tax.