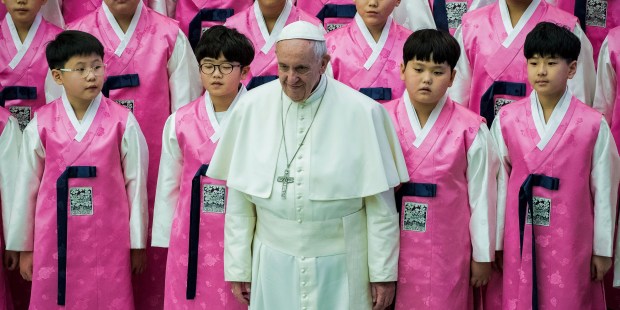 Archbishop Xuereb arrives to new mission, assuring Korean people that Francis prays for them and stays well informed of their situation

The pope’s new representative in South Korea arrived to his new post with an assurance from Francis: “Please assure the Korean people and also the bishops that I will continue praying that future generations will have a future of stability and prosperity.”

This was the message of the Successor of Peter, given through Archbishop Alfred Xuereb, the Maltese prelate who was assigned to Korea and Mongolia in February after several years of working in the Vatican, the Korea Herald reported.

Now the top Vatican representative in Korea, the archbishop said Sunday that the pope is “very much informed about the situation [of the peninsula], and he has great hope that the talks, which started on April 27, about the reconciliation would continue and will be successful so that future generations will live in a peaceful environment, with a prosperous future.”

The archbishop also expressed his eagerness to learn more about his new flock and serve them.

“I told (the pope) that I accepted (his proposal to serve in Korea) very willingly and also with enthusiasm because I feel a sort of attraction. I feel that the Lord is calling me to come here and try to be … to do some good,” Archbishop Xuereb said.

“I am here to serve the Church, and I will do my best with the help of my secretary to get to know Korea as much as possible, in order to serve better. The better I know Korea, the better I can serve the Korean church and Korean people.”

A gaze from Heaven

Archbishop Xuereb noted that over the past 23 years, the Catholic Church in South Korea has been gathering every Tuesday at the feet of the Virgin Mary in Seoul Cathedral to implore the grace of reunification. “I am sure that She from Heaven turns a benevolent gaze toward her children in Korea.”

Archbishop Xuereb, who has served Popes John Paul II, Benedict XVI and now Francis, said he agrees with the pope’s Secretary of State, Cardinal Pietro Parolin, according to whom a “great hope has been kindled” on the Korean peninsula.

Archbishop Xuereb said that “the Catholic Church has a very important role in this process of reunification and, following the mandate of the Divine Master, continues to evangelize and offer its contribution also at the diplomatic level in order to achieve the objectives so desired.”

Pope Francis visited South Korea in August of 2014, on the occasion of the 6th Asian Youth Day. On the final day, he dedicated his Mass in Seoul’s Myeongdong Cathedral to the intention of reconciliation on the Korean peninsula.