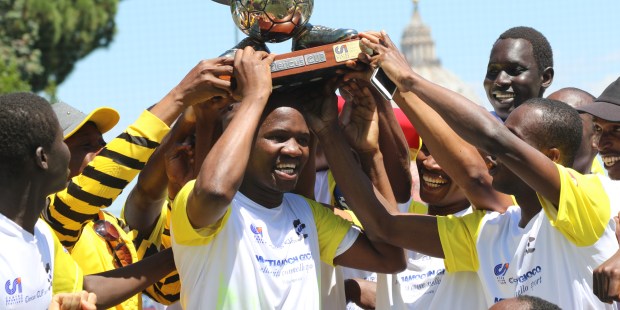 Seminarians bring home the trophy for a third time

When 90 minutes of regulation play resulted in a draw, the game was decided with a penalty shoot-out.

The match on the Pius XI Field, which offers a bird’s eye view of the cupola of St. Peter’s Basilica, was played in front of hundreds of fans supporting both teams.

With a 4-2 victory after penalty kicks, the North American seminarians took the title away from the “Lions of Africa” team, winner of the previous edition. They have thus recovered the title they had already won twice, in 2012 and 2013.

After the winners lifted up the trophy—a soccer ball wearing cleats and a “saturno” (a traditional ecclesiastical hat)—the two teams gathered together to sing the Salve Regina prayer together.