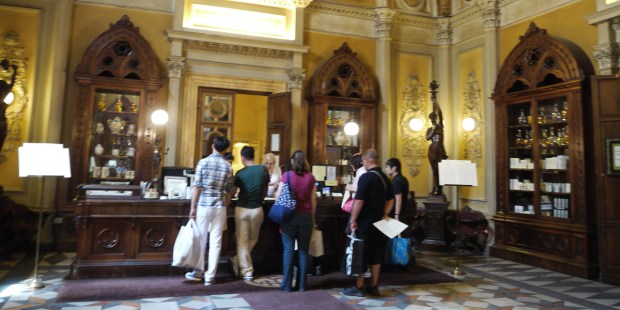 Santa Maria Novella caters to an upscale clientele today just as it did when its clients were members of the Florentine nobility.

Santa Maria Novella, a Gothic church located across the street from Florence’s main train station, is one of the most overlooked cultural treasures of the Tuscan city. Formerly known as Santa Maria delle Vigne, in 1221 the church was turned over to the then newly-founded Dominican Order, which reconstructed and expanded it, turning it into a priory and infirmary.

At the time, Florence was a rising city-state and its vibrant urban life used to attract artists, merchants, and religious figures from all over Italy and Europe. The Dominicans soon started to face competition from the Franciscan Order—started by Saint Francis in the nearby town of Assisi in 1209—that was based in the Basilica of Santa Croce. Sunday sermons by the Dominican preacher Peter of Verona, later known as Saint Peter Martyr, helped attract huge crowds to the newly-established church. But what really helped put Santa Maria Novella on the map of Florence’s civic life was the establishment of an apothecary in the cloister next to the church. It was here that Dominican friars started to turn medicinal herbs grown in the priory into balms, potions, eau de colognes and soaps.

At first such herbal remedies were mostly destined for the community’s infirmary, which was established as part of the Dominican mission to serve the ill. But soon enough their products started to be used as home remedies too. During the Black Death, which killed 70 percent of the Florentine population in the mid-14th century, Santa Maria Novella’s, a potion made of distilled rose water, was a popular antiseptic to disinfect homes.

By the 17th century, the friars’ herbal products started to become sought after items by much of the city-state inhabitants, including the Florentine nobility. Caterina de Medici, the daughter of Florence’s ruler Lorenzo de Medici II, was one of the most loyal customers of the Dominican pharmacy. When she got married to the King of France, Henri II, the Dominican herbalists crafted a special fragrance in her honor using bergamot and other aromatic spices. The perfume, named Acqua Della Regina (Water of the Queen), is still produced today under the name Acqua di Santa Maria Novella (Water of Santa Maria Novella).

Much of the friars’ success was due to their innovative perfume-making technique. Instead of using olive oil or vinegar, the most common base for perfumes at the time, Dominicans used alcohol, which allowed scents to last longer.

After a short suspension of activities in the early 1600s, the pharmacy kept expanding and diversified its production into medicines, perfumes and liqueurs that starting from the 19th century were sold across Europe and the US. During the American prohibition, Santa Maria Novella’s Alkermes liqueur, made by mixing natural spirits with cinnamon, cloves, nutmeg and vanilla, was one of the pharmacy’s best-selling products in the United States.

Today, this 600-year-old herbalists’ business is still alive and well, albeit no longer managed by Dominicans. When in 1886 the newly Italian state started to confiscate church properties, Damiano Beni, the last friar in charge of the pharmacy, asked his layman nephew to take over the apothecary in order to save it from confiscation.

His descendants have grown the pharmacy into a global herbalist business, with shops in New York, Los Angeles, and Tokyo. The international nature of its distribution is matched by a strict traditional crafting process: most of the soaps, distillates and fragrances made by “Officina Profumo-Farmaceutica di Santa Maria Novella” are based on original Dominican recipes and crafted using herbs and flowers picked from the pharmacy’s own garden. A quick internet order is all it takes to try their famous “Acqua di Rose” or Caterina de Medici’s “Acqua di Santa Maria Novella.” But the best way to learn about the pharmacy’s Dominican roots is to visit the church were it all started. Here visitors can learn about the history of “Officina Profumo-Farmaceutica” by visiting the free in-house museum featuring ancient instruments used for distillation, recipes illustrations,and even original packaging from the 16th and 17th centuries.