As the sun slowly rose on Manhattan sending its rays into the dark corridors between the skyscrapers, a familiar scene was unfolding before the massive doors of St. Patrick’s Cathedral on Fifth Avenue. Scores of people dressed in their finest clothes scurried across the sidewalk with smiling eyes and tense laughter, exchanging hugs and warm words of welcome as they made their way into “America’s parish church.”

See the story in pictures! 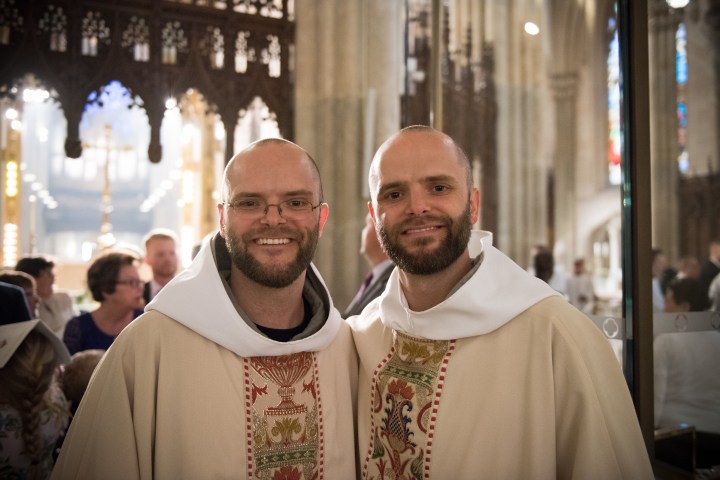 The day is Saturday, May 26, 2018. And on this day, before parents and grandparents, brothers and sisters, friends and family, nine men would lay their lives down in the service of the Gospel to be ordained as priests in the Roman Catholic Church.

As the countless pews were filled and the flowing vestments of the hundreds of clergy lining up looked like a sea of white linen, the nine stood with nervous excitement as the steel pipes of the stories-high organ breathed its first notes, piercing the din of conversation and announcing that this was about to begin.

Cardinal Timothy Dolan with his hallmark joyful exuberance took his place at the seat of the bishop as the names of those presenting themselves for ordination were called by Br. Gabriel Emmanuel Monahan, C.F.R.. One by one, they presented themselves, each being singularly called by Christ to serve His people in the role of priest, each echoing Mary’s “Yes” to the will of God.

As the Cardinal laid his hands upon the heads of each of the men, a soul-deep transformation occurred before the eyes of the thousands gathered and an indelible mark was formed on each of their souls: ”You are a priest forever …”

When the Rite of Ordination silently concluded, the congregation erupted in applause, tears streaming and hearts overflowing. No longer were these men just sons and brothers, they were now able to deliver Christ’s mercy and Christ’s very presence through the sacraments. They were now priests.

As the Mass transitioned to Liturgy of the Eucharist, Cardinal Dolan elevated the host and at the moment of consecration and along with all the clergy, the nine uttered Jesus’ words “This is My Body …” in persona Christi, their first sacramental act as priests.

At the conclusion of the Mass each went to separate areas in the cathedral to offer their first priestly blessings to those who requested them, and their ministry had begun.

But perhaps it’s none of those things.

Perhaps it’s that in this broken and wounded world, in the heart of the city, God still calls and people still respond. And in spite of all the world would tempt with, there are those who, cooperating with grace, humble themselves to serve as Christ did some 2,000 years earlier. So perhaps what makes this ordination extraordinary is that it’s an ordination, and, in fact, every ordination is extraordinary.