An uncomfortable truth about breastfeeding 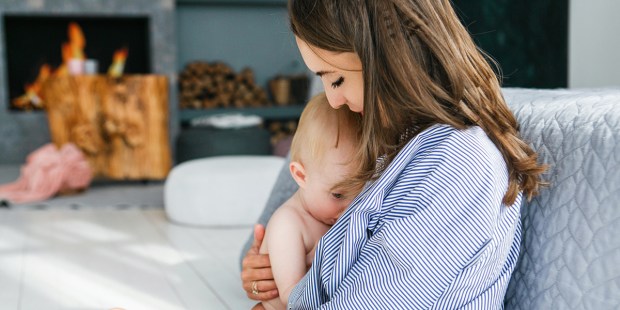 Women need to know the truth, so they don’t think they’re “abnormal.”

I’m kind of a champion breastfeeder. This isn’t a humblebrag or anything; like most of my parenting choices, I chose breastfeeding because it was the easiest option. It was infinitely easier to breastfeed my kids than it was to get out of bed at 3 a.m. to make a bottle, even if it did make it logistically harder to be separated from them for any length of time during their early infancy.

The downside is that weaning is very, very hard, because it’s always easier in the moment to just give the screaming toddler what he wants. But there’s one other downside to breastfeeding that drove me absolutely insane with each new baby — for the first few weeks, it hurts.

It wasn’t the pain that drove me insane, though. It’s manageable, if wince-inducing. What drove me insane was the constant insistence from doctors, nurses, and lactation consultants that “breastfeeding shouldn’t hurt” and that “there must be something wrong with the latch.” A recent post at HealthyWay helpfully illustrates exactly this type of lactation propaganda:

When it comes to breastfeeding myths that won’t go away, this just might be the most difficult-to-dispel myth out there. Nearly every mom I asked about their breastfeeding experience says she experienced a lot of pain. I hear it described as “toe-curling,” while other moms say they were in tears every time their baby nursed.

But when I follow up with experts, they say this type of pain shouldn’t be seen as normal. What is normal is to feel some discomfort during the first couple of weeks.

“That has to to do with the latch,” explains G. Thomas Ruiz, MD, OB-GYN at MemorialCare Orange Coast Medical Center in Fountain Valley, CA. “If the baby is latched properly, initially you might get uncomfortable because your nipple is not used to the breastfeeding … so you kind of get a lot of nipple chafing and dryness.”

Yes, thank you, male doctor. Please tell me how breastfeeding should merely be uncomfortable but not painful. Go on.

Okay, sarcasm aside, I’ve gotten this from female lactation consultants and female nurses, so it’s not just a case of mansplaining. But after breastfeeding children for over 12 years (I know, right?!) I am here to tell you that “discomfort” is not the word for those first two weeks of breastfeeding.

A better description would be “tiny irrational being chomping blindly/desperately on an extremely sensitive part of your body.” And that translates to pain, y’all.

No, it’s not the kind of excruciating pain that necessitates a strong painkiller. And it does recede to manageable discomfort within about 10 days before disappearing entirely once mom and baby get the latch thing down. But for those 10 days, it’s real, measurable, sometimes alarming pain — made all the more so when moms are told that it shouldn’t be painful, and if it is, they’re doing it wrong.

Listen, my fellow mamas: you are not doing it wrong. Breastfeeding is unexpectedly difficult, much more so than the lactivists would have you believe. It takes time, effort, work, and is almost always accompanied by frustration and tears (for both you and baby). The fact that you are trying at all speaks to your devotion to your baby, and your dedication to give him or her the best possible start in life.

No two babies are alike, just as no two mothers are alike. Your breastfeeding experience will be different than someone else’s — and that’s okay. You’re doing something amazing for your baby and for yourself — keep rockin’ it, mama.

Read more:
Why breastfeeding in public makes me so uncomfortable