How many Catholics can say they belong to a parish where a saint was once pastor?

In Baltimore, there’s a parish that can boast that it’s had two saints lead its flock over the years: the National Shrine of St. Alphonsus Liguori.

St. John Neumann served Baltimore’s thriving German population at St. Alphonsus in the mid-1800s. He was canonized in 1977. His successor as pastor, Blessed Francis Xavier Seelos, who also served in Connecticut, Illinois and New Orleans, was beatified in 2000.

Not only that, Lithuania-born Sister Casimira Kaupas taught at the now-defunct St. Alphonsus School in the early 20th century. As Mother Maria Kaupas, she was declared a Venerable Servant of God in 2010.

Is the parish still turning out saints? One can only hope. But if the art and architecture have anything to do with inspiring a person to holiness, as some believe, there’s a good chance that it will.

The 1972 nomination to the National Register of Historical Places called St. Alphonsus an “outstanding example of American Early Gothic Revival.”

“It is one of the first Gothic buildings based on a careful study of medieval models which is most frequently characterized in the Anglo-American ecclesiological movement,” the application said. 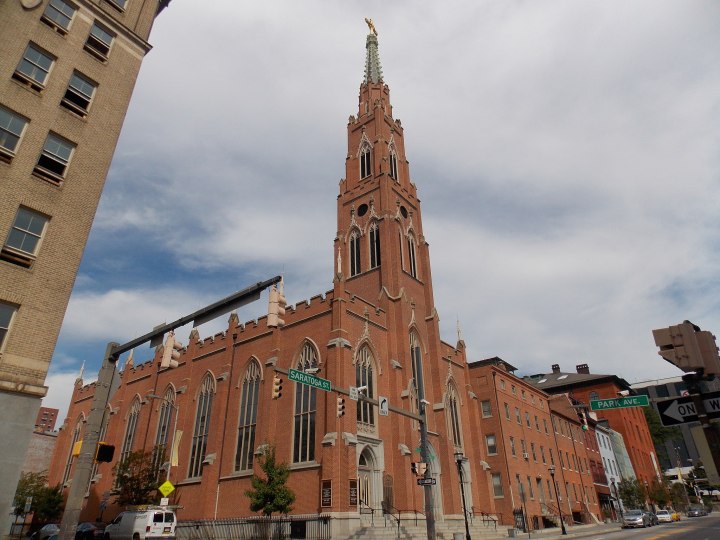 The church has also been called “the German cathedral” for its Southern German neo-Gothic style. Redemptorist priests like Neumann came to Baltimore to serve German immigrants. By 1917, however, many of the Germans who lived in the area moved elsewhere and St. Alphonsus became a parish for the Lithuanian immigrant community.

Located at the corner of West Saratoga Street and Park Avenue, the church is just around the corner from the headquarters of the Archdiocese of Baltimore and two blocks away from the Baltimore Basilica, the nation’s first cathedral.

The religious order that now serves at the parish, the Priestly Fraternity of St. Peter, offers the Extraordinary Form of the Latin Rite seven days a week, as well as Masses in English and Lithuanian. Many parishioners come for the “extraordinary” beauty of the Latin Mass.

But if such a liturgy is to be offered in such beautiful surroundings, the parish feels, it deserves the most beautiful music as well. The parish is planning a musical Collegium as a place of learning and prayer in the form of sacred music. It wants to turn the shrine into a “national center for promoting excellence and community in service of the sacred liturgical arts.” Toward that end, it is starting a children’s choir school where youngsters learn to sing Gregorian chant and polyphonic motets; scholas dedicated exclusively to the study and practice of Gregorian chant in the Mass and the Divine Office; men’s, women’s, and mixed choirs that concentrate on the Church’s rich heritage of sacred polyphony, and chant camps, workshops, and retreats focused on sacred music and liturgy.