Meet the chart-topping Benedictines of Mary and their music 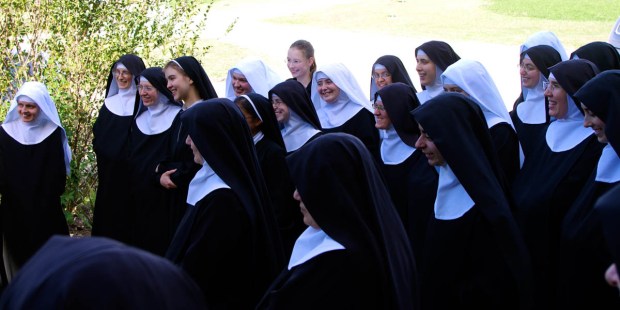 The rural Missouri-based nuns have just released a new CD honoring the Sacred and Immaculate Hearts and the Pure Heart of St. Joseph.

Cecilia Music meets the singing Sisters, the Benedictines of Mary, to talk about their music and their new CD honoring the Sacred and Immaculate Hearts and the Pure Heart of St. Joseph.

1) Dear Mother Cecilia, how was your community born?

Our community was founded in 1995 under the Priestly Fraternity of St. Peter (who incidentally also released a music CD last year!). Our first convent was right next to their seminary in Pennsylvania. With time, it became increasingly difficult to manage a monastic schedule and assisting at the seminary, so we delved fully into the monastic life in 2000. We continued to devote our lives to the service of priests, but in more of a spiritual way. We were established in the Diocese of Kansas City-St. Joseph in 2006 with 13 members. Now we are 35, with 10 candidates joining us later this year.

2) You have just released a new CD. Can you tell us more about it?

We love our chapel, and have spent over seven years singing the ancient chants of the Church in this simple yet prayerful place. The only problem was that it is small and meant to be temporary. We traded in our choir stalls (special seats for the chapel) for ordinary pews to squeeze more Sisters in the choir. But then postulants started filling up the back pews we reserve for lay guests. When vocational interest began increasing, we realized we had to do something — we had to build again. The Carthusians have a saying “to build is to suffer,” and while we do not have the wizened experience of long-time religious, we have energy, and we can sing. So off we went in our tenth recording adventure to do our part in financing the project.

In the early building planning stages, we knew we needed to entrust everything to St. Joseph. Since St. Joseph had to provide room and board for Christ Himself, we knew we could count on him to do so again in building a house for Christ’s presence among us still. So we started processions, singing and walking along spray-painted lines where the foundations of the church would be. One day, after a procession to honor St. Joseph, I turned to the Sisters, and said “What do you say — if St. Joseph builds our church, how about we do a CD in his honor to thank him?” The Sisters expressed great enthusiasm at the time, even though recording takes much extra effort.

Construction began and whirred away into summer and fall 2017. Since it was the centenary of the apparitions at Fatima, we felt strongly urged to record in honor of the Sacred and Immaculate Hearts, since at Fatima Our Lady requested that these Hearts be honored at the same time. But the final theme of the CD was suggested to us by His Eminence, Raymond Leo Cardinal Burke. His Eminence led a retreat at the Priory, which culminated in the renewal of our monastic vows and the Enthronement of the Sacred Heart in our Priory. We all sang “Holy God, We Praise Thy Name,” with the Cardinal at the close of the brief ceremony, after which we thanked one another for its beauty, especially the singing. His Eminence asked about a recording, and we told him we were debating between one to the two Hearts and one to St. Joseph. He simply replied, “You know what you should do, is one to the Sacred Heart of Jesus, the Immaculate Heart of Mary, and the most Pure Heart of St. Joseph.” The Sisters all began to cheer at this answer, and as one Sister said, it seemed like a mandate from God: now we had to do this CD!!

3) This is not your first music production. When and why did you start producing albums?

We actually made our first recording in 2008, with the intention of giving a gift back to our benefactors. One thing led to another, and we ended up recording an average of one album per year for the next 9 years! This was in reaction to such a favorable response from our benefactors and others, and at the same time, helped us pay our debt and build a retreat house for priests, along with needed additions onto our Priory. The Hearts of Jesus, Mary & Joseph at Ephesus is our tenth full-length recording.

4) How can music bring us closer to God?

Music actually reflects God in an amazing way. If it is beautiful, it reflects Him Who is Beauty Itself, ordered and harmonious; it propels the soul upwards almost in spite of itself. Beauty is the most incontestable aspect of God, the gentlest and kindest of reformers. Gregorian chant is a prime example. Here you have the inspired Word of God inspiring in turn the old melodies based on the chants of the ancient Temple: music that is written for scripture to produce contemplative prayer. It is completely ordered, yet with a free rhythm. It is disciplined, yet freeing and almost passionate at times, but always subject to certain rules and the primacy of reason. The philosopher Simone Weil said that she knew classical music aficionados who could be morally depraved, but she never knew this to be the case for Gregorian chant. It is designed to make you a better person.

Singing the Word of God introduces formality, less personality involvement and imposition of one’s own will on a form of prayer. There is an elevation of the voice, and this is proper in addressing the Most High God. In community, there is a concerted effort to blend and produce a united sound. A spiritual reality is paralleled: restraint is needed, attention to self is dropped. It is truly the “sacrifice of praise”!

Important especially for religious, and even more especially Benedictines. A large portion of his rule is on the recitation of the Divine Office, and in his Rule is that stirring injunction: let nothing be placed before the work of God, that is, the Divine Office. It is truly the song of the bride to her bridegroom, the voice of the Church. The bride exalts the perfections of her Bridegroom in praise that cannot contain itself, but exhorts all creation to join in the praise of its Creator.

Pietro da Lucca, in a 16th-century sermon on Raphael’s “Ecstasy of St. Cecilia,” says: “Heaven begins here and now, it is here, in exile, in the lives and prayer of the blessed life. Then death comes, it loosens the bonds of the flesh, the Victor carries on high the soul, singing in psalms.” It is a means to union with God, a very anticipation of the life of heaven, but also extends aid to us on earth in the struggles of life.

5) How do you explain your growth?

The two things young women often comment on are our seriousness with regard to the Divine Office and approach to monastic life, and the massive amount of joy they sense when they are with the Sisters. It’s true, we are profoundly united and happy as a community, bound as we are by charity, but also our deep-seated love of the liturgy and its rich traditions. We all feel very much called to plant contemplative Benedictine religious life here in the Midwest in its ancient, original and traditional expression. It seems to “catch on” with the almost daily vocation inquiries and the 10 (so far) set to join in the fall. The average age of the community is 28, including our dearest pillar and treasure, 94-year-old Sr. Wilhelmina.

6) What do you have you in the works now?

At the moment, we’re taking a breather! The remaining church construction is taking up a good deal of energy and time, and we pray that we can sell many more albums to support the last few months of construction bills.

7) Where can we find your CD and support your community?

The Hearts of Jesus, Mary & Joseph can be found with our other CDs on our website as well as on Amazon and iTunes.

Name: The Benedictines of Mary, Queen of Apostles

Hometown: The Sisters are from all over the U.S. and the world!

Latest Album: The Hearts of Jesus, Mary & Joseph at Ephesus