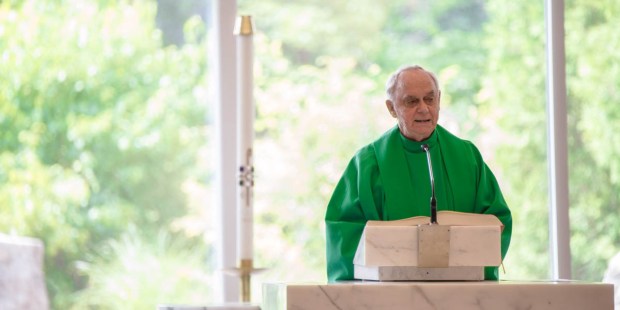 On saying good-bye, and taking the cross on the way to the Resurrection.

“So how’s your day going so far?” the man at the counter asked, as he rang up the two pots of bee balm and the deer repellent. We had stopped at the local family-owned garden shop on our way home from our pastor’s last Mass as our pastor. I’ve been having friendly conversations with this man for 20 or 25 years.

“It’s been okay,” I said. I could have said, “We just came from our pastor’s last Mass, and we’re really going to miss him, so it’s not really a good day so far,” and gotten sympathy and maybe a few questions, genuinely asked. But I didn’t really trust myself to talk about it. It’s hard to explain the feeling of loss. He would have been moved in a year or two anyway. Yet, still. We’d grown to love him over the 10 years he’d served our parish. He’d meant a lot to our family and especially to my wife and me. I wrote a little about it a couple weeks ago.

He made it sound easy

The Mass had been a normal Mass, with an unusually good homily on the Trinity. Fr. Rich spoke, as he always does in some way, of the love of God, of the need to receive it and love Him in return, and with His love to love others.

He began the homily saying that “This Sunday is often called the preacher’s nightmare.” Just a few people seem to have gotten the joke, which was a little sad. Then he said: “But every Sunday is Trinity Sunday.” That jarred me for a second — what, preaching every Sunday gives him nightmares? — till I realized he wanted to point us to the Mass as our joining in the life of the Trinity.

He made it sound easy. Fr. Rich’s words are always intensely “of the Gospel,” as my Evangelical friends say. He spoke of the good news, given by the One who said, “Come to me, all you who are weary and burdened, and you will find rest for your souls, for my yoke is easy and my burden is light.”

I had assumed, as I suspect many of us do, that the Gospel must always hurt a little. Jesus came “for us men and our salvation,” as we say in the Creed, but he also came to make a deal. And I want to make a deal, so I can tell myself I’ve got something to offer God. Our pastor kept telling us God loves us completely, without conditions. I realized, only now, how much I’d needed to hear that over the last few years.

Just before he gave his final blessing as our pastor, Fr. Rich spoke a few words about leaving. Ten years ago he hadn’t asked to go to St. Joseph’s and St. Joseph’s hadn’t asked to have him. I sensed that things had not gone so easily at first, but I could be wrong. His ministry had been filled with blessings and memories he would take with him. He thanked us for that.

He said he was leaving the next day. He talked about putting all his things into boxes, finishing with a wooden chalice and paten he kept in memory of the Indian priest who’d first inspired him to become a priest himself. He’s being moved to serve as a hospital chaplain, and I know he’ll do it beautifully, but I also know how much he loved being a parish priest and pastor.

Then he said (I quote from memory), his voice switching suddenly from memory to loss: “Every goodbye has the Cross in it. This has a cross in it. But we get to the Resurrection through the Cross. I pray this cross will lead to a resurrection.” My wife reached down into her purse and pulled out tissue.

Then he blessed us. We sang the closing hymn. Usually at the noon Mass, the procession starts down the aisle as we start to sing and we only sing one verse. Today, Fr. Rich stood at the altar singing till the beginning of the last verse.

People lined up from the back door where he was standing down the center aisle almost to the altar. As I looked up, a very big man got to the front of the line and threw his arms around Fr. Rich.

The candle after Mass

After Mass I lit a candle and prayed for a sick friend, as I always do. And as I always do, I lit a second for someone else. As I lit the candle for Fr. Rich in front of the St. Joseph shrine, I prayed for him, thanked God for him, and reflected on the good he would do serving the sick and dying at Mercy Hospital. I asked St. Joseph to take care of him.