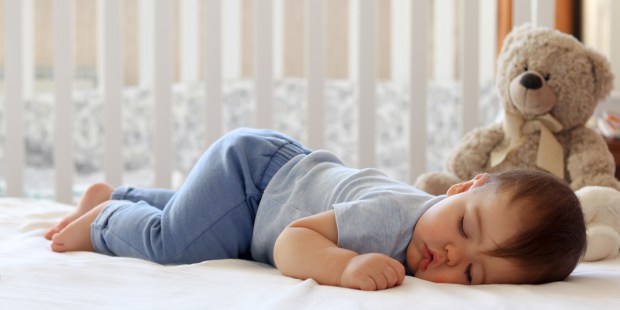 The bottoms up position is fairly universal, but there are two different theories about why.

My dad likes to tell my kids the story about how when I was a baby, I slept with my knees tucked under me and my booty sticking up in the air. He thought it was so funny and said he was always tempted to paint a stripe down my back, since I looked like a little skunk.

Of course, my kids think this story is hilarious — particularly the skunk part. Personally, I always found it a little mortifying before I had kids — just one more way I was a strange child, I used to think.

But after five kids I’ve come to realize that there’s nothing strange at all about babies sleeping bottoms-up — in fact, it’s downright common. According to Romper, sleeping in child’s pose is both comforting for babies and allows them the greatest amount of freedom:

It turns out there are several reasons science has posited to explain why babies sleep in child’s pose. That frog-like position may be due to the way they were positioned in the womb, noted Richard Polin, MD, director of the division of neonatology at Columbia University in an interview with Parents. As your baby gets older and moves about more, their bodies fall into positions that allow them that freedom, according to the European Journal of Applied Psychology.

This seems paradoxical at best, and doesn’t quite align with my own experience. With my kids, the ones who crawled and walked early did not sleep in this position — they preferred to sleep either flat on their stomachs or flat on their backs, but they never stayed in one place for long. My early movers started moving even in their sleep, changing their sleeping position as often as I changed mine.

It was my sweet, docile little cuddlebugs that assumed child’s pose in their cribs. These were the ones who preferred being rocked and sung to, who would be happy in my arms for endless hours but miserable on a playmat within five minutes, who slept well, ate well, and just weren’t in all that much of a hurry to get moving.

In fact, the one baby who slept like this most often didn’t even roll over until he was five months old, and wasn’t crawling until he was almost 8 months old. And no, he didn’t have any sort of motor skill delay — he spends most of his time these days imitating American Ninja Warrior and scaling anything and everything in sight.

But when he was a baby, he was fat and happy. He liked to be cuddled and comforted and he wasn’t in any hurry to move around on his own. My theory is the child’s pose is the most comforting and secure position for babies because it is so similar to the tucked-up way they spent the first 10 months of their lives.

But experience is subjective, and yours might be different than mine. So tell me — did any of your babies sleep like this? If so, were they early crawlers seeking freedom even in sleep, or laid-back cuddlers who just wanted to feel secure?