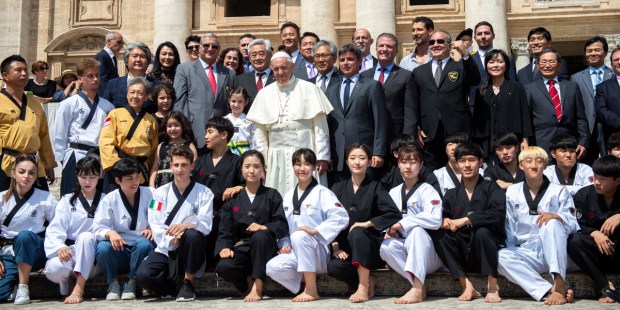 Recognizes athletes at general audience, hails their message of peace over victory

Pope Francis called the two Koreas to peace and unity after his catechesis at the general audience on May 30. The Holy Spirit, he had said earlier, is “the author of diversity but also the creator of unity.”

Dozens of Korean athletes at the audience performed taekwondo techniques accompanied by an interpretation of the Ave Maria sung in several languages.

The athletes then unfurled a banner on which was written (in Italian): “Peace is more precious than victory.”

The pontiff hailed this message of “peace for all humanity.” “The two Koreas together!” Pope Francis exclaimed.

Initially, athletes from both Koreas were to be present. However, the North Koreans were impeded by a visa problem, so only South Koreans participated in this performance.