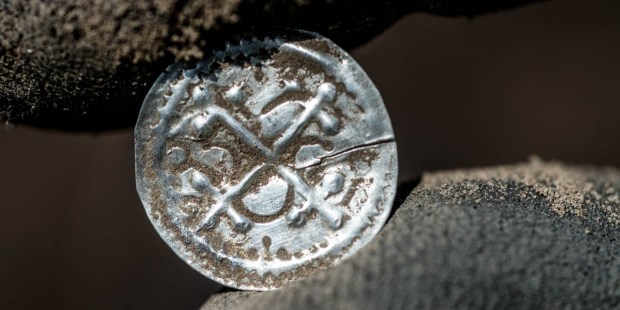 This significant find is the “biggest single discovery of Bluetooth coins in the southern Baltic Sea.”

An amateur archaeologist, Rene Schön, and a 13-year-old boy, Luca Malaschnitschenko, were treasure hunting on the island of Rügen, Germany, with metal detectors when they discovered a metallic coin. They initially thought it was aluminum, however closer inspection revealed that it was made of silver.

The pair returned with a team of archaeologists and began a dig of over 400 sq meters surrounding the area. It did not take long to find a hoard of treasure, which they think once belonged to the Danish King Harald Bluetooth. CBS News has a list of what they found:

The team uncovered remarkable artifacts, including braided necklaces, pearls, brooches, a Thor’s hammer (a representation of a mythical weapon forged by dwarves), rings and up to 600 chipped coins, including more than 100 that date to Bluetooth’s era.

The oldest piece of the treasure is a Damascus dirham coin dating back to 714 AD and the most recent is a penny minted in 983 AD. This time frame, along with geographical location, has led the team to hypothesize that this horde was indeed the property of King Harald Bluetooth, who ruled from 958 to 986.

We know that King Harald lost a battle to his rebellious son, Sweyn Forkbeard, in the late 980s, which matches up with when the treasure was buried. After losing his throne he fled to Pomerania, a region that includes parts of modern northeast Germany and western Poland. The island of Rügen is also located in this area.

Lead archaeologist Michael Schirren commented, “This trove is the biggest single discovery of Bluetooth coins in the southern Baltic Sea region and is therefore of great significance.”

King Harald experienced a conversion to Christianity during his reign. While the accounts of how his conversion came to be are contradictory, he is credited with introducing Christianity to his traditionally pagan lands.

Bluetooth was also a great unifier, whose rule tied together parts of Norway, Germany, Sweden and Denmark. It was for this that Intel’s Jim Kardach was inspired to name his 1997 technology after Bluetooth. The executive commented that “the new technology that would unify communications protocols like King Harald had united Scandinavia.”