Wanted: Students to ride horses while reading the Great Books 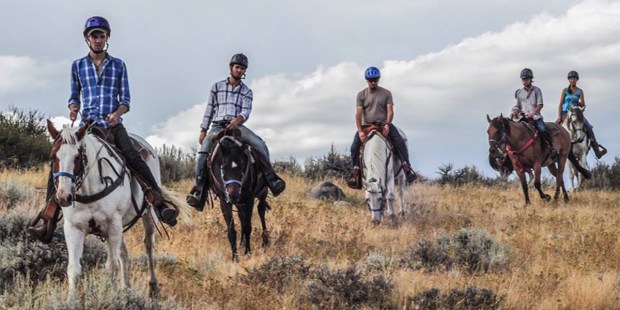 The lost art of horsemanship is alive and well Wyoming Catholic College.

The list of “great books” of Western literature that students read at Wyoming Catholic College includes Homer’s Iliad, in which the hero Achilles has a conversation with his horses before heading off to battle. Achilles complains that it’s their fault his friend Patroklos has been killed in battle, and one horse replies that Patroklos’ death is actually the fault of Apollo and destiny, and that Achilles, too, will one day die in battle. Achilles then shouts out his war cry and heads off to war.

Lorine Sheehan, a 2014 graduate from Wyoming Catholic who now heads its Equestrian Program, says that when students have direct physical contact with a horse it gives them a new perspective of the bond that can develop between a human and a horse, which ties back into the curriculum, “illustrat[ing] how important horses were to Achilles.”

Wyoming Catholic College is unique among Catholic institutions in that it requires students to take a semester class in horsemanship, regardless of their level of experience in riding. Students are provided the opportunity, Sheehan says, to be paired with a particular horse that matches their personality so that they may “learn to communicate with, teach and be taught by them.”

Horsemanship is a beautiful part of #peak2016 #wyomingcatholiccollege

A post shared by Wyoming Catholic College (@wyomingcatholiccollege) on Jul 2, 2016 at 7:51pm PDT

“Being given dominion over an irrational animal gives you a unique way to experience creation,” says Sheehan.

For three hours once a week, students travel to a nearby ranch and learn horse characteristics, basic horse care and practice riding under the watchful eye of an instructor. As students progress, they go on day rides and enjoy the beauty of the landscape surrounding the college. Students may see herds of deer, elk or antelope; there is also an eagle that lives on a nearby mountain that students hope to spot. Students are also introduced to herding cattle in a rodeo arena, and while on trail may help round up strays for ranchers who live nearby.

A private, four-year institution located in Lander, Wyoming, Wyoming Catholic College was founded in 2007 and has a student body of 177. The school’s mission includes “the active remaking of culture through the recovery of the Western intellectual tradition.” Students enjoy an active Catholic spiritual life including daily Mass and confession. The college curriculum includes outdoor activities, such as the horsemanship program, which make use of the beautiful and vast country that surrounds the college.

A post shared by Wyoming Catholic College (@wyomingcatholiccollege) on Dec 19, 2016 at 11:32am PST

Sheehan explained that the college seeks to form the mind, body and spirit of each student. The equestrian program, she continued, “fits under the body category. We get our students outside, enjoying leisure in an active but non-stressful way.”

The equestrian program is also “a way for students to understand the physical sense of where we are meant to be in relation to nature, caring for it as good stewards.”

Since horses are sensitive to moods, Sheehan says, a student who is upset or excited must learn “to master his emotions. If you’re having a bad day, you have to move on. If you’re excited, you have to control that energy,” she says.

Alaska’s Michaela Houser, 21, who will be a senior at Wyoming Catholic in the fall, had little riding experience starting out, but was excited to try it. Her excitement gave way to fear, however, as she realized that the horse “is a big animal, with a mind of its own.” After two semesters of learning the basics of horsemanship, however, riding a horse has become an “amazing experience, and I want to be riding out there all the time.”

Peter F. ('19) has a way with animals…of all kinds. #wyomingcatholiccollege #bodymindspirit

A post shared by Wyoming Catholic College (@wyomingcatholiccollege) on Dec 20, 2016 at 1:53pm PST

Horses, Houser believes, can make a connection with people, and they give their riders “an opportunity to learn about themselves.” Since a rider must communicate with a horse in a nonverbal way, it can make the rider more attuned to his or her own nonverbal modes of connecting. Hence, when Houser is around other people, she’s become more aware of the nonverbal communication she gives and “has become more effective in communicating with others.”

Houser admits to falling off the horses a few times, but dutifully followed the time-tested rule: “When you fall off a horse, get right back up in the saddle.”

From Mary Murray, one of the College's horsemanship instructors, an image of "Michaela ('19) jumping Will, one of our mustangs." #WyomingCatholicCollege #BodyMindSpirit #HorsemanshipProgram #WCCLife

A post shared by Wyoming Catholic College (@wyomingcatholiccollege) on Oct 16, 2017 at 5:45pm PDT

While it’s common for those unfamiliar with horses to be intimidated by the program, Sheehan says she’s seen many students blossom into accomplished horsemen and women. “You may go into the program scared, but you soon learn there is no reason to be,” she says. “The horses will come to understand and respond to you. They take you to the edge of your limits, but not beyond.”

Wyoming is a fitting location for a horsemanship program, as horses played a central role in the settlement of the West. In fact, the area surrounding the City of Lander is still dotted by numerous ranches that welcome tourists in search of equestrian adventures.

Read more:
“Husband Horses” and the Feminization of the Horse Industry