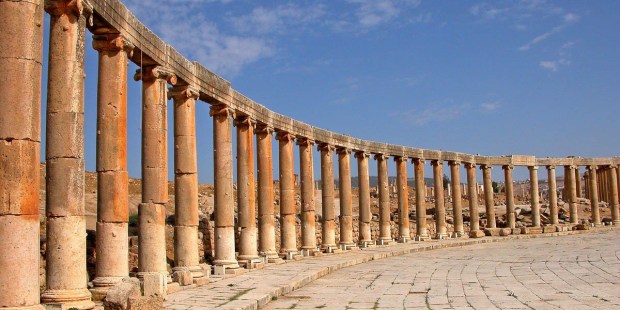 LiDAR gives archaeologists insight into how residents of Jerash managed their water system.

Parts of the ancient city of Jerash, 30 miles north of Amman, Jordan, have been destroyed by war and earthquakes over the centuries. But the biggest threat facing the city’s archaeological treasures, which draw thousands of tourists each year, seems to be the growing modern city.

Jerash, which was one of the ten cities making up the ancient Decapolis, has been growing fast in recent decades. Some of the growth is covering ancient parts, and that worries archeologist David Stott from Aarhus University in Denmark, National Public Radio reported.

“Within Jerash, about 50 percent of the city has been built over since the 1950s,” Stott told NPR, adding that the process of urban encroachment is happening all over the world. “We as archaeologists have a duty to identify what we want to preserve for the future and what we cannot preserve.”

So he and other researchers used a new technology called Light Detection and Ranging, or LiDAR — basically laser pulses from an aircraft — to create a precise 3D map of the site. The technology has revolutionized archaeology by allowing scientists to map large areas with unprecedented speed and accuracy, NPR said.

Stott said that people have been taking aerial photographs of Jerash, with its plaza lined with Greco-Roman columns, two amphitheaters, a hippodrome, temples and churches, since the First World War. The LiDAR map was compared to historic photos of the site, allowing researchers to map what has been destroyed, as well as what still stands.

The LiDAR map allows researchers to see features of the city that are subtle and more difficult to pick up using other methods, the article states. It reveals, for example, clues about the ways ancient people transported water from nearby rivers and springs.

The map provides evidence for “a complex and sophisticated system of aqueducts and irrigation channels that ran into the city and out of the city,” Stott said.