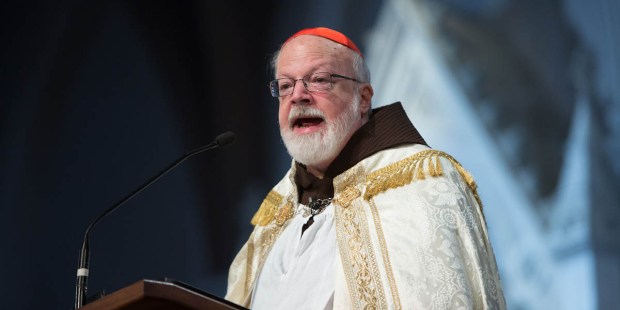 Cardinal Sean O’Malley of Boston recently signed an appeal, along with other religious leaders, calling for serious action on climate change at all levels of society.

The cardinal publicly presented a statement May 23, signed by more than 500 religious leaders and scientists. The statement, a call to arms of sorts, reads, “All of us—religion, science, business, labor, government, education, civic organizations, communities, and individuals—must do our utmost to reduce greenhouse gas emissions and to protect our communities from the catastrophic impacts of climate change.”

Many of the religious leaders who signed the document had already gone a long way in helping reduce greenhouse gas emissions and educating their faithful.

Cardinal O’Malley said, “From the perspective of the Catholic community it is encouraging that many people of diverse religious beliefs or affiliations have found Pope Francis encyclical Laudato Si’, published three years ago this week, to be a source of inspiration.”

The cardinal said Pope Francis called all people of good will to make caring for creation a priority and each community could do so through education, advocating for responsible public policy, and by making choices that “respect and support the sustainability of the world around us.”

The Archdiocese of Boston had already made a bold decision to embark on a project that will see it offset tons of carbon dioxide emissions every year.

By the end of summer 2018 the parking lot at the pastoral center in Braintree, Massachusetts, will be home to a 1 megawatt (mw) solar panel canopy capable of producing 1,190 mw hours of energy every year. This is the equivalent of the amount of energy it takes to power 100 homes.

In addition five charging stations for electric vehicles will also be installed and the parking lot will get high efficiency LED lighting.

The installation of the solar field and the LED lighting is expected to reduce the pastoral center’s energy costs by 50 to 70 percent according to Terrence Donilon, a spokesperson for the archdiocese.

Donilon said the archdiocese hopes its parishes will consider going solar as well.

While switching to solar power can involve a significant upfront expense, it can cut energy costs dramatically and reduce an organization’s carbon footprint just as much.

With help from Massachusetts Interfaith Power & Light — an organization that helps churches audit their energy efficiency, and take on advocacy initiatives — at least two Christian churches in Massachusetts have switched to solar power and significantly cut the amount of greenhouses gases released into the atmosphere by their church buildings.

Solar panels were installed on the roof of St. Dunstan’s Episcopal Church in Dover, Massachusetts in June, 2013. The installation of the panels allowed the parish to reduce its carbon footprint by 50 percent and produce two thirds of the electricity it needs every year.

Eliot Church, a United Church parish in Newton, Massachusetts, installed solar panels on the roof of its building in 2016. The nearly 32,000 kilowatt hours of energy produced by the solar panels have provided 98 percent of the church’s electricity needs.

Most churches and houses of worship, like St. Brigid’s Catholic Church in Lexington, Massachusetts, have made less expensive changes like switching to LED lighting and upgrading to energy efficient heating systems. Just by converting to natural gas heating, installing energy efficient lighting and spraying insulation in the roof of the church building, St. Brigid’s cut their heating cost by 53 percent and reduced its carbon dioxide emissions by nearly 53 tons.

Across the country 14 Catholic parishes and 14 religious congregations or institutions have switched their buildings to solar power.

The Vatican installed 1,000 solar panels on the roof of the Paul VI Audience Hall under Pope Benedict XVI in 2008. The panels produce 3,000 kw hours of electricity per year and run the heating, cooling and lighting systems in the audience hall. Extra energy is fed into Vatican City’s power grid.