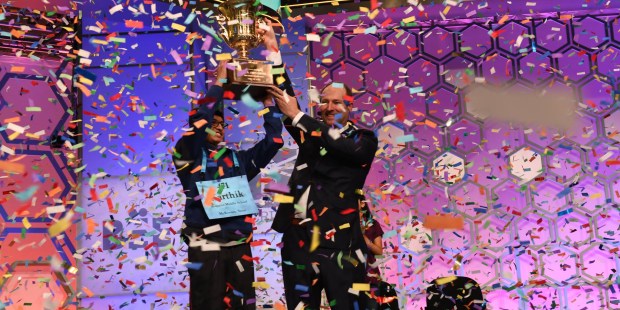 Merriam-Webster defines koinonia as “the Christian fellowship or body of believers,” as well as an “intimate spiritual communion and participative sharing in a common religious commitment and spiritual community.”

The 14-year-old student from Scoggins Middle School in McKinney, Texas, won the Scripps National Spelling Bee Thursday when he correctly spelled the Greek word, which is used often in the original New Testament.

Karthik will receive a prize valued at $40,000 over all, including $25,000 in cash, a reference library from Merriam-Webster and a pizza party for his school, the New York Times reported.

Karthik, the son of an immigrant from India, was one of more than 500 spellers in this year’s competition, in spite of having failed in regional competitions. Organizers had instituted a new program in the 93-year-old competition called “RSVBee,” which allowed participants who had not won a regional or state spelling bee to enter. Karthik qualified as a wild card through the “RSVBee” program.

Having come out on top in Thursday’s prime-time competition at the Gaylord National Resort and Convention Center in National Harbor, Maryland, Karthik thanked his spelling coach and attributed his success to the encouragement of his father, Krishna Nemmani, an immigrant from Hyderabad, India, who was in the audience, the Times noted. Karthik said he would spend his winnings on college, and that he hoped to study technology.