How the Eucharist was foreshadowed in the Old Testament 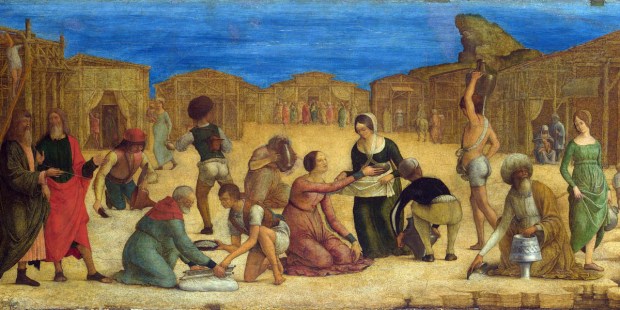 Jesus himself spoke about these episodes in the Bible that prepared the way for the Eucharist.

God could have chosen anything in the world to impart his real presence, but instead chose the ordinary elements of bread and wine. This was not a decision made after the incarnation of Jesus Christ, but something God chose well beforehand. In fact, God was preparing his people all throughout history for this great gift and planted many seeds in the events of the Old Testament that would later bear fruit after Jesus’ ascension.

Jesus refers to some of these events during his lifetime, revealing a divine plan that was in full continuity with the past. Here are two of these primary events from the Old Testament.

The most obvious event from salvation history that is linked to the Eucharist is the Jewish Passover. Jesus instituted this great sacrament within the Passover celebration, proclaiming to his disciples, “‘Take, eat; this is my body.’ And he took a cup, and when he had given thanks he gave it to them, saying, ‘Drink of it, all of you; for this is my blood of the covenant, which is poured out for many for the forgiveness of sins” (Matthew 26:26-28).

The Catechism of the Catholic Church further explains this link, “the unleavened bread that Israel eats every year at Passover commemorates the haste of the departure that liberated them from Egypt … the ‘cup of blessing’ at the end of the Jewish Passover meal adds to the festive joy of wine an eschatological dimension: the messianic expectation of the rebuilding of Jerusalem. When Jesus instituted the Eucharist, he gave a new and definitive meaning to the blessing of the bread and the cup” (CCC 1334).

Furthermore, “By celebrating the Last Supper with his apostles in the course of the Passover meal, Jesus gave the Jewish Passover its definitive meaning. Jesus’ passing over to his father by his death and Resurrection, the new Passover, is anticipated in the Supper and celebrated in the Eucharist, which fulfills the Jewish Passover and anticipates the final Passover of the Church in the glory of the kingdom” (1340).

Manna in the wilderness

Closely related to the Passover and the events of the Exodus from Egypt, Jesus specifically mentioned the “manna” (a type of wafer bread that appeared each morning during the Jew’s sojourn in the desert) and connected it to the Eucharistic gift he would leave behind after his death.

“Jesus said, ‘Our fathers ate the manna in the wilderness; as it is written, “He gave them bread from heaven to eat.”‘ Jesus then said to them, ‘Truly, truly, I say to you, it was not Moses who gave you the bread from heaven; my Father gives you the true bread from heaven. For the bread of God is that which comes down from heaven, and gives life to the world’” (John 6:31-33).

If that wasn’t obvious enough, Jesus made the connection again, “I am the bread of life. Your fathers ate the manna in the wilderness, and they died. This is the bread which comes down from heaven, that a man may eat of it and not die. I am the living bread which came down from heaven; if any one eats of this bread, he will live for ever; and the bread which I shall give for the life of the world is my flesh” (John 6:48-51).

These are just two examples from the Old Testament that display how God was preparing for this great gift to humanity throughout history and highlights the love God has for us to give us the bread that “gives life to the world.”

Read more:
Demons Believe and Tremble before the Real Presence

Read more:
10 Movie moments that capture the meaning of the Eucharist