Pope calls on journalists to fact-check, even in race to get news up fast 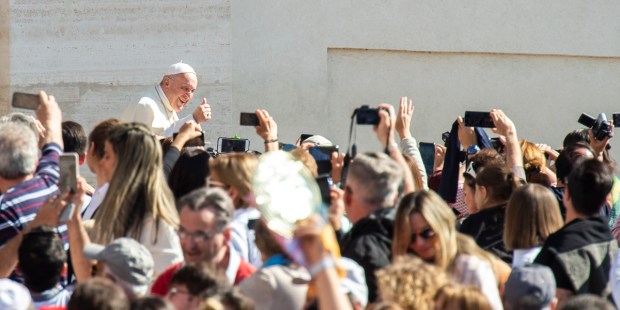 When in doubt, remain silent, rather than destroying a person, group or event

Pope Francis had some practical advice for those in news media today, as he addressed a delegation from an international journalism award, the Biagio Agnes.

Pope Francis offered three words as a guideline to remember:

Peripheries. Very often, the nerve centres of news production are found in large centres. But this should never make us forget the stories of people living far away in the peripheries. They are at times stories of suffering and degradation; other times they are stories of great solidarity that can help everyone to look at reality in a renewed way.

Truth. We all know that a journalist is required to write what he thinks, what corresponds to his informed and responsible understanding of an event. It is necessary to be very demanding with oneself so as not to fall into the trap of the dynamic of opposing interests or ideologies. Today, in a world where everything is fast, it is increasingly urgent to appeal to the troubled and arduous law of in-depth research, comparison and, if necessary, also of remaining silent rather than harming a person or a group of people or delegitimizing an event. I know it is difficult, but the story of a life is understood at its end, and this should help us to become courageous and prophetic.

Hope. It is not about telling of a world without problems: that would be an illusion. It is a matter of opening spaces of hope while denouncing situations of degradation and despair. A journalist should not feel satisfied with the mere fact of having reported on an event, according to his own free and conscious responsibility. He or she is called upon to keep open a space for exit, meaning, hope.

Read more:
What’s the pope got to say about fake news?