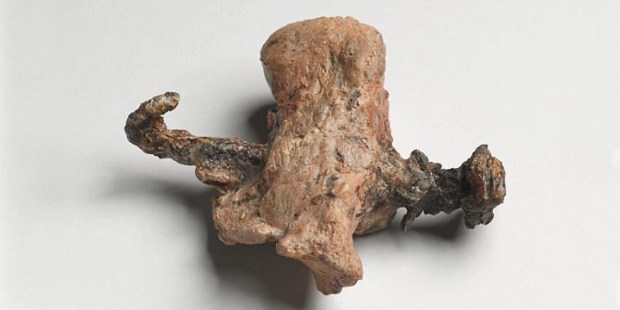 Findings are not definitively conclusive due to the rarity of such specimens.

While there are numerous written accounts of the ancient Roman practice of crucifixion, there is very little physical evidence that has survived the 2,000 years since such executions were common. This is why a lesion on the foot of a 2,000-year-old skeleton has excited the archaeological community; the skeleton may be the only second example of a victim of Roman crucifixion ever to be discovered.

The findings are based on a new analysis of a skeleton discovered in 2007 in a tomb in Italy. They were published in the peer-reviewed journal Archaeological and Anthropological Sciences by co-authors Emanuela Gualdi and Ursula Thun Hohenstein, from the University of Ferrara.

Emanuela Gualdi told the Italian-language paper Estense, “In the specific case, despite the poorly preserved conditions, we could demonstrate the presence of signs on the skeleton that indicate a violence similar to crucifixion.”

The new analysis of the remains has revealed that the bones belonged to a man between the ages of 30 and 34. Unfortunately, radio carbon dating is impossible because of the poor preservation of the specimen. The remains were dated from the Roman era from contextual clues, such as fragments of clay and brick found alongside the bones.

The Times of Israel reports that the skeleton was discovered during an infrastructure operation in northern Italy’s Gavello municipality. The body was laid on its back with the arms at its side and the legs stretched. Unusually for the era, it was not buried with any belongings. Closer examination of the bones found lesions on the right heel.

While the anthropological analysis of the remains was performed by the team at Ferrara University, they were sent to the University of Siena, where 3D images were taken of the lesions, and the University of Florence’s Molecular Anthropology laboratory, for genetic testing. Through all these studies, the right heel, which had been pierced clean through the bone, was the only part that exhibited potential evidence of crucifixion.

While the researchers admit that these findings are not definitively conclusive, they note that it is difficult to understand the practice fully with only one other example to compare it to.

Previously, the only evidence of a victim of Roman crucifixion comes from a 1968 Jerusalem excavation performed by Vassilios Tzaferis of tombs from a massive Second Temple Jewish cemetery (2nd century BCE to 70 CE). The Times Israel describes the findings:

On the heel bone of the older male was discerned a 18 cm (7-inch) nail, upon which was found some 1-2 cm of olive wood — remnants of the cross from which he was hung, researchers concluded. Upon publication, the world heralded this unique proof of the historicity of crucifixion.

The similarities between the 1968 remains and the ones found in 2007 have led researchers to suspect that the methods of execution were the same.

While the arms do not show evidence of damage, if the nails were driven through the wrists they could have avoided the bone, only marring the flesh, which decayed thousands of years ago. Alternatively, they hypothesize that the wrists could have merely been tied to the cross, instead of nailed.

As for who this crucified individual was, researchers have developed theories based on contextual clues. They note that crucifixion was reserved for marginalized members of society: slaves (even after their freedom), revolutionaries, foreigners, criminals and other non-Roman citizens, with the exception of soldiers who deserted.

“This kind of execution,” co-author Thun Hohenstein told Estense, “was generally reserved for slaves. The same topographical marginalization of the burial induces us to think that it was an individual considered dangerous and neglected by the society in which he lived that he was rejected by it even after death.”