VIDEO What was it like to witness the last 24 hours of Pompeii? 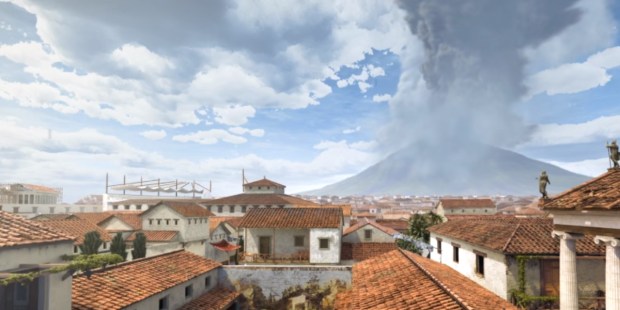 An animated imagining of what victims of the AD 79 eruption of Mt. Vesuvius were fleeing from

The photograph of the skeleton of the unfortunate soul who managed to flee from Pompeii during the eruption of Mt. Vesuvius only to be decapitated by a giant slab of rock has become an internet meme.

This skeleton found in Pompeii tells the story of one poor man pinned beneath the rock. https://t.co/s2dKP7o4or

News that he was a Roman merchant carrying a “treasure trove” of silver and bronze coins lends even more pathos to this tableau, confirming what we should already know – “you can’t take it with you” and “Vanity of vanities, all things are vanity!”

Besides inspiring us to think about the precariousness of life, and the futility of man’s attempts to steer his own course, the image brings out the rubbernecker in us. What happened there, we wonder? What was Pompeii like on August 24, 79? What was this poor guy fleeing from? How did that giant slab of rock become airborne?

This digital animation depicting “A Day in Pompeii,” created by the Australian studio Zero One in 2009, and using historical data on the volcanic eruption, shows what it was like to witness one of the most destructive natural disasters in history.

Created for an exhibition on Pompeii at the Melbourne Museum, the 7-minute long immersive video shows the view from a villa overlooking the city and Mt. Vesuvius, giving us a vivid and terrifying sense of what the citizens of that city experienced in the last 24 hours of Pompeii. The exhibition was the most popular in Australia’s history, running over four months and attracting 325,000 visitors.