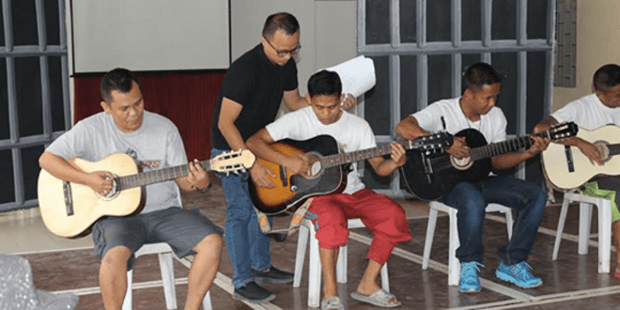 Like Aslan singing a world into being, music can be a spectacular expression of God’s creative power.

One of my favorite scenes in the Chronicles of Narnia comes from The Magician’s Nephew. It’s when Aslan sings the Narnian world into being. Aslan, Lewis’ symbol for God, shows how God’s creativity finds a most spectacular expression through music.

This image is confirmed by common experience, especially here in the Philippines. Visit any local church, and you will find a choir at the heart of local liturgical traditions.

More than a pervasive feature of Filipino culture, music is also a powerful chisel of our beliefs. It can transform a cradle Catholic, whose faith wobbles on memorized prayers, to a mature believer whose faith is anchored on an intimate experience of God’s love.

Sometimes, music even transforms non-believers into believers, as we see in this story.

In the New Bilibid Prison in Muntinlupa, Jesuit Fr. Ro Atilano offers free guitar lessons. In his last class of students, the best player was Alex, a 23-year-old serving time for attempted homicide. According to Alex, learning the guitar helped him to rediscover his goodness, after years of feeling ashamed of his crime: “I thank God not only because I now know how to play the guitar, but also I see now that there are still a lot of good things that I can do.”

At the end of the lessons, Fr. Ro held a class recital.  After performing, Alex was so moved, he cried.

Fr. Ro said that at that moment, “I could almost see in his faith how his dignity was restored.” Before Alex went home on parole, he asked to be baptized.

In music leading Alex to embrace baptism, we see something similar to the creation scene from Narnia. In both instances, music leaves reality completely changed. In Narnia, Aslan sings a new world into existence from nothing. In Alex’s story, learning the guitar transformed him from a young man blind to his dignity to one aware of his true worth, as a son of God.

Read more:
For Pope Benedict, Music is Inspired By An Encounter with the Divine

In Alex’s transformation, we see a repeat of creation because in him the nothingness of sin, through music, becomes his path to faith and redemption.

His story reminds us that creation isn’t complete yet. Creation continues to happen each time a person abandons sin and surrenders himself to God’s healing embrace. Creation happens every time a person who can’t see his dignity, somehow rediscovers it, and decides to live by it.

So next time you encounter someone who doesn’t believe, remember conversion is still possible, because God’s work of creation hasn’t ended.