The real reason you may be directionally challenged 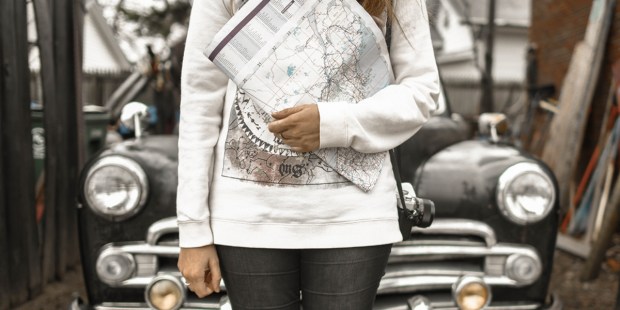 A shortcut in our language could be responsible for the difficulties you have navigating.

So here’s a true fact about me: I cannot navigate to save my life.

I mean that literally, y’all. If I were required to navigate anywhere at all in order to save my skin, I would be dead before you can say “the sun sets in the west.”

Here’s an example: in high school I worked at a Tex-Mex restaurant that was right down the street. Literally a 5-mile drive across city streets, one that I made every day for two months. Until the fatal day when I decided that hey, I had been 16 and driving with a license for two whole months. I could definitely handle taking the highway.

I definitely could not handle the highway.

Unbeknownst to navigationally-handicapped me, the highway split literally directly before the exit I took from our house into two separate highways, only one of which meandered past my place of business. Guess which one I took.

In the end I called my sister (who waitressed at the same restaurant) in tears and hysteria from a gas station 20 minutes northeast of the job I was 20 minutes late for. She guided me back and then pulled double duty by reassuring my confounded managers that no, I wasn’t lying and yes, I actually was that hapless and incompetent.

There’s a point to this anecdote, and it’s this: apparently being navigationally crippled is not entirely my fault — in fact, according to Lera Boroditsky’s TED talk, the language we use could play a large part in my lack of navigational abilities.

These are the Kuuk Thaayorre people. They live in Pormpuraaw at the very west edge of Cape York. What’s cool about Kuuk Thaayorre is, in Kuuk Thaayorre, they don’t use words like “left” and “right,” and instead, everything is in cardinal directions: north, south, east and west. And when I say everything, I really mean everything. You would say something like, “Oh, there’s an ant on your southwest leg.” Or, “Move your cup to the north-northeast a little bit.” In fact, the way that you say “hello” in Kuuk Thaayorre is you say, “Which way are you going?” And the answer should be, “North-northeast in the far distance. How about you?”

So imagine as you’re walking around your day, every person you greet, you have to report your heading direction.

But that would actually get you oriented pretty fast, right? Because you literally couldn’t get past “hello,” if you didn’t know which way you were going. In fact, people who speak languages like this stay oriented really well. They stay oriented better than we used to think humans could. We used to think that humans were worse than other creatures because of some biological excuse: “Oh, we don’t have magnets in our beaks or in our scales.” No; if your language and your culture trains you to do it, actually, you can do it.

The entire talk is fascinating and goes way beyond navigation ability, but for me this is where the talk began and ended. Because I have long believed, the older I’ve gotten, that the words “left” and “right” absolutely cripple our ability to navigate. Why would you use words that require the slightly more difficult work of orienting yourself in relation to the polar axis of the planet when you could just use the words that orient yourself in relation to the polar axis of yourself?

It’s a language “shortcut” that might seem clever, but is ultimately crippling. At least for those of us who lack the basic navigational sense to tell north from west and south from east. (And everything in between.)