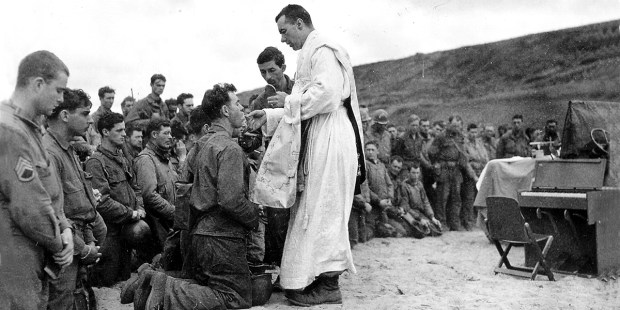 Click here to launch the slideshow
Seventy-four years after the Allied invasion of Normandy, we remember and honor those who served during the largest seaborne invasion in history. On that one day, over 10,000 Allied soldiers were killed, wounded or declared missing in action. In the course of the Normandy campaign, which lasted through August 21, 1944, Allied forces landed more than two million men in northern France and suffered more than 226,000 casualties.

Chaplains and Catholic priests played an important role in providing essential spiritual and psychological guidance during the days and weeks that followed. Unarmed, they courageously put themselves on the front lines to say Mass, offer pastoral care for active and wounded soldiers, and provide last rites for the dying and prayers for those killed.

Click “Launch the slideshow” in the image below to see some incredible photos from D-Day and brave chaplains and priests who served during the aftermath: