These saints were each graced with a visual encounter with the Heart of Jesus.

A popular devotion in the Catholic Church is directed to the “Sacred Heart of Jesus.” While it is deeply rooted in scripture, the devotion was not well known until various saintly visionaries reported seeing Jesus and his beloved heart.

These visions have been recognized by the Church as authentic. While the faithful are not obliged to believe in them (as is true of any personal revelation), the Church finds merit in these visions and the devotions surrounding them because they reflect “the entire mystery of Christ, the totality of his being, and his person considered in its most intimate essential: Son of God, uncreated wisdom; infinite charity, principal of salvation and sanctification of mankind. The ‘Sacred Heart’ is Christ, the Word Incarnate, Savior, intrinsically containing, in the Spirit, an infinite divine-human love for the Father and for his brothers.”

Here is a brief list of four visionaries along with the messages they received. 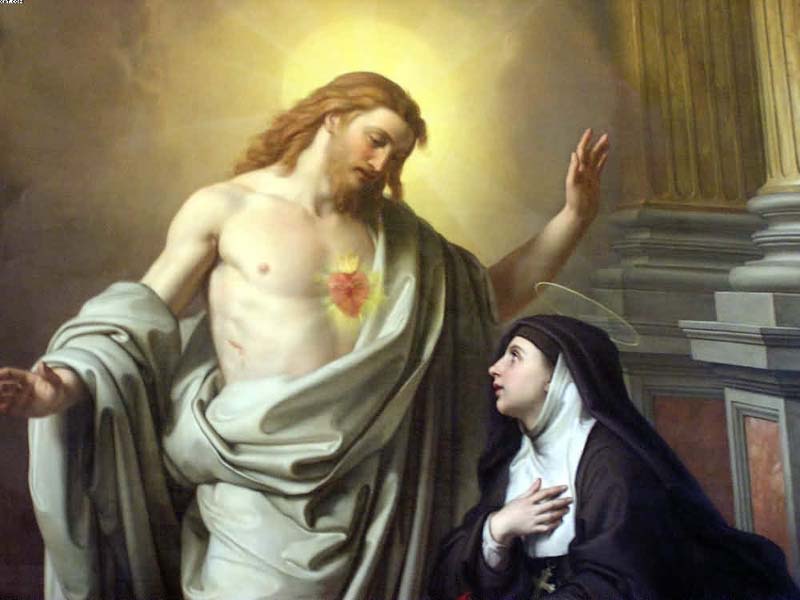 Born in the 12th century, Lutgardis joined a Benedictine monastery and started to receive visions of Jesus and his pierced heart. In one of her visions she experienced an “exchange of hearts,” where Jesus asked her: “What, then, do you want?” She said, “I want Thy Heart.” In response, Jesus said, “You want My Heart? Well, I too want your heart.” Lutgardis then proclaimed: “Take it, dear Lord. But take it in such a way that the love of Your Heart may be so mingled and united with my own heart that I may possess my heart in Thee, and that it may always remain there secure in Your protection.”

In the 13th century, St. Mechtilde, a Benedictine nun in Germany, received many visions of Jesus during her life. A book was written about her experiences and Jesus appeared to her one day, holding this book on his Heart with his right hand. He kissed it, and said to her, “All that is found written in this book has flowed from My divine Heart, and will return to it.” Jesus also said to her, “In the morning let your first act be to greet my Heart and to offer me your own. Whoever breathes a sigh toward me, draws me to himself.”

Gertrude began receiving heavenly visions at age 25 while living in a Benedictine community in the 13th century. One day she saw both St. John the Evangelist and Jesus. She was invited to place her head on Jesus’ heart and spoke to John, asking him, “Well-beloved of the Lord, did these harmonious beatings which rejoice my soul also rejoice thine when thou didst repose during the Last Supper on the bosom of the Savior?” John replied, “Yes, I heard them, and my soul was penetrated with their sweetness even to its very center.” Gertrude asked, Why, then, hast thou spoken so little in thy Gospel of the loving secrets of the Heart of Jesus?” He responded, “My mission was to write of the Eternal Word … but the language of the blissful pulsations of the Sacred Heart is reserved for latter times, that the time-worn world, grown cold in the love of God, may be warmed up by hearing of such mysteries.”

In 1673, a French Visitandine (Visitation) nun named Margaret Mary Alacoque had visions of Jesus, wherein he asked the Church to honor his Most Sacred Heart. Among the promises he communicated, Jesus said to St. Margaret Mary, “In the excess of the mercy of my heart, I promise you that my all powerful love will grant to all those who will receive communion on the First Fridays, for nine consecutive months, the grace of final repentance: they will not die in my displeasure, nor without receiving the sacraments; and my heart will be their secure refuge in that last hour.”

Read more:
How to enthrone the Sacred Heart in your home (and heart)