EXCLUSIVE PHOTOS: See how a mother’s prayers changed a man and changed the world

An incredible revelation from a priestly ordination in Trenton

Daylight streamed through the leaded glass windows of the little room that sits adjacent to the entrance to the Cathedral of St. Mary of the Assumption in Trenton, New Jersey. The room sits in stark contrast to the cathedral’s soaring marble columns and radiant stained glass that bathes the cavernous space with Gospel glory through a dance of color and light. On Saturday, June 3, the little room was the last place that four men would stand together before crossing over the threshold of the sanctuary and taking their places to be ordained as Priests.

“Any last words of advice for these guys?” asks Bishop David M. O’Connell to the handful of priests gathered in the little room, and in equal measures of wisdom and wit, both deep truths and hilarious anecdotes were dispensed — breaking the tension of the moment and raising the mood to that of cheerful exhilaration.

As they stood exchanging laughs and lighthearted banter, it was interesting to consider that each arrived at this destination by traveling a long and winding road of discernment, each with his own story to tell. The call they responded to was prayerfully discerned, nurtured and supported, and the role of the “domestic Church,” the family, was foundational to them standing as they were right in that little room.

Parents, grandparents and even siblings, each playing their part in helping shepherd the young men to being open to and freely choosing the call that each had received.

Fathers as models of virtuous masculinity, of courage and fortitude, ideally demonstrating Christ-like living, however imperfect …

Mothers as models of strength, sacrifice and devotion, taking on a role that’s strikingly Marian in character: giving life, giving love and standing at the foot of the “crosses” in life that their sons endured.

Through the annals of time, and even in the modern day, the stories of women praying for men and leading them to holiness could fill the libraries of the world. And when it comes to the priesthood, it would seem that a mother’s prayer may be the source of a level of grace that’s seldom brought to bear by any other means.

As Christ took his humanity from Mary, it seems that a son often finds his path to Christ through a mother’s heart.

As the newly ordained priests descended from the altar into the welcoming arms of families and friends, immersed in words of congratulations and prayers of thanksgiving, they took their places to give their first priestly blessings.

And it was by chance that at the foot of the sanctuary, in a crowded cathedral in downtown Trenton on a sunny Saturday morning, a moment occurred in which this invisible truth became visible in all its startling beauty and grace. 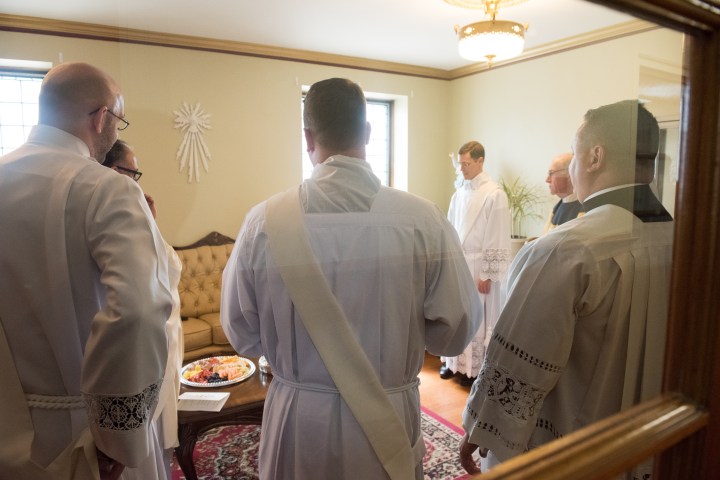