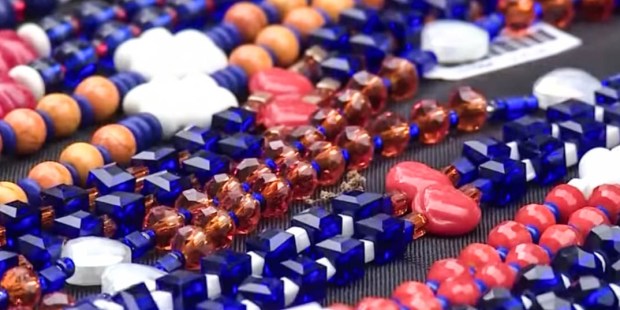 The Astros have won every time that they’ve sold out.

Baseball is a game that has always lent itself well to faith. Between all the crazy superstitions and last minute prayers in the bottom of the 9th, baseball has long been summed up by “Tug” McGraw’s famous phrase, “Ya gotta believe.” Now, the faithful fans of the reigning World Champions, the Houston Astros, have taken this faithful instinct to the next level, bringing religion to the ballpark.

The Church of Annunciation, across the street from Minute Maid Park, is responsible for this newest trend for fans of the Astros. Parishioners of the 149-year-old Catholic community hand make rosaries with the team’s color scheme and sell them outside the church before every game, drawing crowds that compete with the stadium itself.

The business began as an evangelical effort, with the hope of encouraging people to pray with fashionable beads. However, as the sales blew up, The Church of Annunciation turned it into a fundraiser for their current renovations, as well as helping to fund an expansion construction project, which would see the addition of two buildings for offices and residence. Since they began last June, they have sold more than 3,000 rosaries and raised tens of thousands of dollars.

The pastor of the parish, the Rev. Paul Felix, spoke with Fox about the efforts of his flock: “I’m not sure [the sales] will raise the money for everything. But, in terms of relationships, it’s an entrée to relationships and so forth, and one thing leads to the next.” He added, “We don’t believe our mission is within the four walls of this church. Our mission is also to outreach and engage people.”

The rosaries have become so popular that they have made their way into the hands of Astros owner, Jim Crane, and Miss Texas 2018, Logan Lester — and one has even been delivered to Pope Francis. “The priest who took it to him said that he laughed. He thought it was a good idea.” Father Felix told Fox.

Father Felix also mentioned that the Astros have won every time that they’ve sold out, although he does not credit his church with their 2017 World Series victory. “Of course, they won the World Series, so we’re grateful for that,” he said. “Those are prayer’s answers, one might say.”

Parishioner Peter Goedick commented on the diversity of fans who come to their roadside fundraiser. “It’s wonderful. And, I just love the fact that even people who aren’t Catholics are buying rosaries. If they ever want to pray the Rosary, great. If they don’t, that’s alright.”

These team-themed rosaries are only available before Astros’ home games. Some fans wear them on their necks during the games as a show of solidarity with the team and the parish. So next time you see a Houston home game on TV, take a look at the crowd to see a sea of colored rosaries.