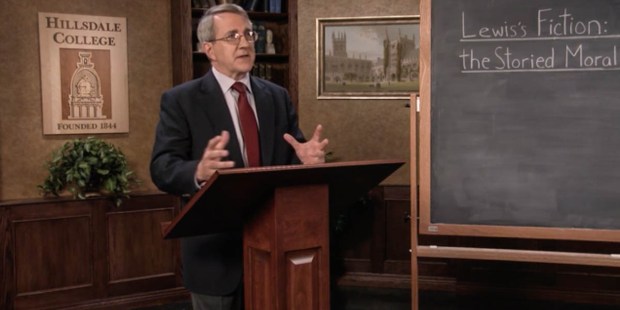 Hillsdale College is offering a lecture series on the work of the Christian apologist, novelist, and critic.

If you loved The Chronicles of Narnia as a kid, and find yourself returning again and again to Mere Christianity as an adult, you may be ready to take a deeper plunge into the works of C.S. Lewis.

You need not go it alone, though. Hillsdale College is offering a free online course on the Christian apologetics, fiction and cultural criticism and philosophy of C.S. Lewis.

The 9-lecture series is taught by Hillsdale president and professor Larry Arnn, and professors Michael Ward and David Whalen, and examines both Lewis’ academic and popular writing. At the end of the course, students will have a greater understanding of C.S. Lewis and why he is considered by so many to be among the most important writers of the last century. His criticism of scientific materialism, The Abolition of Man, which this course covers, was ranked #7 in National Review’s list of 100 Best Non-Fiction Books of the 20th Century, and Boston College professor Peter Kreeft named it one of six “books to read to save Western Civilization.”