Courtesy of Warriors to Lourdes

Thousands of military personnel converged on a French town.

That sentence could have appeared in a newspaper 100 years ago, in the final months of the First World War.

But it refers to an event that took place just last month, in Lourdes, a place of pilgrimage in the foothills of the French Pyrenees.

Some 14,000 troops, both active and veteran, coming from more than 40 countries, met in peace. 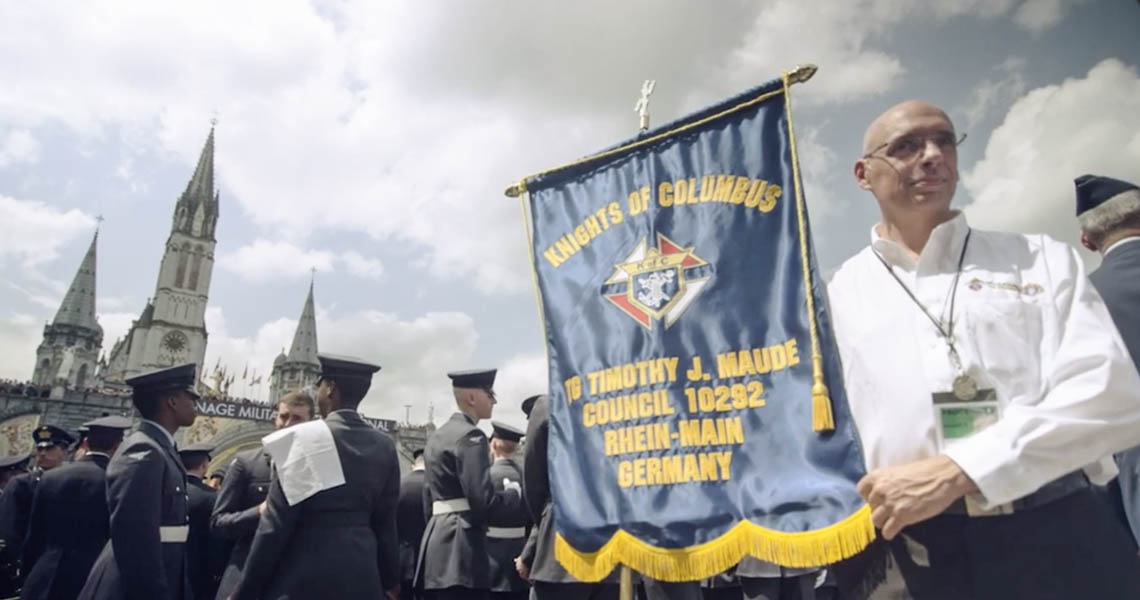 Some, however, were still fighting interior battles.

Among them was Capt. Gary M. Rose, who was a medic with the U.S. Army Special Forces in the Vietnam War. Rose received the Medal of Honor, the nation’s highest military accolade, from President Donald J. Trump at the White House last October. The citation recognized Rose’s bravery in treating nearly 70 wounded soldiers during Operation Tailwind, a secret mission in Laos in 1970, while being exposed to machine gun fire.

For almost 48 years, though, he has struggled with a decision he made in the heat of battle.

“I ordered that three people who were dead to be left behind,” Rose confided in a recent interview. “We were trying to carry them through the jungle, and I realized that with the constant combat and fighting going on, it just took too many people to carry the dead through that thickness of the jungle, and we needed [the American soldiers] on the perimeter. … I had to be concerned for the living, and there wasn’t anything you could do for the dead.”

The three dead were Montagnard paramilitary personnel who joined the American forces in an effort to head off North Vietnamese shipments of weapons through Laos to South Vietnam.

“What bothered me about it was the fact that if you leave the guys behind, they don’t get returned to their families. Their families don’t get closure. They don’t get the proper burial, whether they’re Buddhist or Catholic,” Rose said. “And it just didn’t set well, and it hasn’t set well with me for half a century over the fact that you leave these three people behind. But I knew that if I had tried to carry them, somebody else would have been hurt or killed. You can’t do that.”

Rose, who is a past grand knight of a Knights of Columbus council in Huntsville, Alabama, came to the attention of the international headquarters of the Knights after the White House Medal of Honor ceremony. The Knights invited him to Warriors to Lourdes, a program of the Archdiocese for the Military Services USA that they sponsor, as part of the weeklong International Military Pilgrimage to Lourdes. The archdiocese and the Knights take scores of veterans, especially those with physical and emotional injuries.

The International Military Pilgrimage was inaugurated following World War II to foster “reconciliation, peace and healing.” The theme this year was Pacem in Terris (Peace on Earth).

“I’ve known that all along, technically, legally, morally, everything, it was the right decision” to leave the dead in the jungle, Rose said, even though it was unlikely their bodies would ever be recovered. “Everybody told me that it’s the one that should have been made.”

But none of those reassurances ever gave him the interior peace he needed.

“I think after my trip to Lourdes, somehow I’ve come to the realization that I made the right decision,” he said. “It is what it is, and I’m confident that the three men that I ordered left behind, I feel they know that I didn’t do it out of malice, but I did it in reference to their friends and fellow soldiers” who could still survive the battle.

What is it about Lourdes that can provide such healing?

“With the 66 confirmed miracles at Lourdes, many of our pilgrims go seeking physical, but also spiritual and moral healing,” said Col. Charles Gallina, a retired Marine who also served in Vietnam and now coordinates the annual pilgrimage for the Knights of Columbus. “Lourdes is a holy place, it’s a spiritual place, and it is a place where, the ability to go into the baths from the spring created by the Blessed Mother—and those waters are still the same waters coming from the same spring as they were 160 years ago—I think it brings a sense of calm, a sense of peace, and a sense of that ability to leave the problems at home, just drop them, and let the spirituality of Lourdes, the feeling and the presence of the Blessed Virgin Mary there.”

Rose attested: “I’m not a theologian, but there’s definitely a presence there, whether it’s the Virgin Mary or the Holy Spirit or whatever it is, there’s just a presence for good there.”

“There is a saying that in war there are no unwounded soldiers,” said Gallina, who completed a total of four years of combat duty in Vietnam, including as a Marine platoon commander. “There is no way that any of our warriors can go through combat without damage. Here we bring our sick, our wounded, our ill, and our injured to join our brothers and sisters from the militaries of over 40 nations where they can in fact seek the healing and the peace that they need.”

The experience gives veterans strength to carry on, he said. That goes for those battling post-traumatic stress disorder or those with terminal illnesses who have little hope for a physical healing. One, for example, told Gallina that he feels like “now he can face the rest of his time with faith and hope and realize a deeper spirituality as he overcomes the anxiety and depressions associated with his illness.” A pilgrim with stage 4 brain cancer was so inspired that he got out of his wheelchair and walked the arduous course of the Stations of the Cross.

“The pilgrims around him were in awe, and they were strengthened by his strength,” Gallina remarked. “His own comment was, ‘I came for physical healing, but I found spiritual and moral healing, which is more important.'”

Aside from PTSD, the phenomenon of “moral injury” is something that has been recognized relatively recently. Anglican Fr. Steven G. Rindahl, an Army veteran who served in Iraq and later became a military chaplain, defined it as “the result of some form of assault on deeply-held moral beliefs, which causes the person to question his own morality.”

“That assault could be something that that person did that he believes is outside of his moral code, or something that he witnessed or was a collective part of, even if not the direct person involved,” Fr. Rindahl said in an interview. “Most commonly it’s associated with combat. If you have the reality that soldiers, sailors, Marines, airmen go into a combat environment, they followed all the rules, they followed the rules of warfare, rules of engagement, … they have no ethical culpability, but still it’s an action against how we’re designed. We’re not intended to cause destruction to other image-bearers of God. So there is an internal moral issue that’s going on [that] creates damage to the soul, that needs to be cared for.”

Rindahl, who was an instructor in the Army Medical Department Center and School in San Antonio and wrote the Army curriculum on providing the ministerial response to moral injury, went with the Knights to Lourdes to give other chaplains a seminar on the subject. He himself is inspired by the Gospel passage of the man sitting by the pool of Bethesda.

“He’s been an invalid for years, and the first question Jesus asks him is, ‘Do you want to be healed?'” Fr. Rindahl said. “So you have people who recognize that there’s something that might be wrong. It may be physical, it may be emotional, it may be mental, it may be spiritual. And they’ve reached out to say ‘I want to be healed.’ And they’re placing themselves in a position of receptivity to the blessing of healing that God has for them. That’s done through their prayers, through their participation in the sacraments.”

Gallina said that priests were available 24/7 for confession and counseling. Also, pilgrimage leaders encourage veterans to take the spiritual healing and the lessons learned at Lourdes back home with them and develop of a plan to build on them.

Rose was grateful for the opportunity. “When you physically demonstrate—and this is the important thing that a lot of these individuals that were on this pilgrimage—and they’re suffering from PTSD—you talk to them and you find out they get to this point where they think people don’t care. And this is a physical demonstration to these individuals that went, I think all of them now know that there are people that care,” the veteran Green Beret said. “The caring is expressed in such a way that they are told that their life counts. It’s as important as any other human being on this planet. Verbalizing that is important.”

The Lourdes experience, he said, “in the long term is going to help them either deal with their infirmities—some of them have damage that just can’t be repaired. But that doesn’t mean they can’t get to a point where they can have a good life, a long life and an enjoyable life. Maybe this is … one of many steps that is going to help them get there.”