Mary has the dragon firmly pinned to the ground.

Mothers are often tender, soft and comforting. Sometimes, however, they can be quite fierce. We colloquially refer to this as the “mama bear” instinct. A mother’s intense love for her child moves her to do all she can to protect them when she senses that they are in danger, regardless of how much suffering she must endure to do so.

Mary, our heavenly Mother, possesses all these maternal qualities to perfection. She is unparalleled not only in grace, wisdom and tenderness, but also in the fierceness with which she protects us when temptation and evil draw near. Her relationship to us, both as guide and protectress, finds its root in her identity as Mother of the Lord. Lumen Gentium tells us:

“This maternity of Mary in the order of grace began with the consent which she gave in faith at the Annunciation and which she sustained without wavering beneath the cross, and lasts until the eternal fulfillment of all the elect. Taken up to heaven she did not lay aside this salvific duty, but by her constant intercession continued to bring us the gifts of eternal salvation. By her maternal charity, she cares for the brethren of her Son, who still journey on earth surrounded by dangers and cultics, until they are led into the happiness of their true home” (LG 62).

Given that we are not yet in the “happiness of our true home,” and are, as a result, still subject to temptation, Mary’s role in our life isn’t just that of the tender mother. She also actively battles evil on our behalf.

I was reminded of this recently when a friend sent a link to a piece of artwork depicting Mary wrestling with a clawed, horned beast, presumably Satan. Our Lady had firmly pinned the dragon to the ground by the horns. Nearby stood an angel holding a child, whom I took to be the child Jesus, but could also represent us as Mary’s children.

Mel Gibson creatively displays Mary’s battle with the evil one during the scene of the scourging in ThePassion of the Christ. The devil is depicted as a mother holding a child, a distorted antithesis to archetype Madonna and child image of the Blessed Mother and Jesus. The camera flashes back and forth between this eerie image of evil and the suffering face of Blessed Mother herself, who was likewise present, accompanying her son in his supreme act of obedience to the Father.

Many images of the Blessed Mother don’t depict the devil that graphically, but still subtly remind us both that temptation is real and that Our Lady has power over it by showing Mary’s foot crushing the head of the serpent.

All power, all grace, and all victory over evil ultimately come from Jesus. But he chose to give his beloved Mother a particular role in his plan of salvation. In fact, the instant that evil entered the world through sin, God revealed that he would triumph over evil through a woman, later understood to be the Blessed Mother. In speaking to the serpent, the Lord said, “I will put enmity between you and the woman, and between your offspring and hers; they will strike at your head, while you strike at their heel” (Gen 3:15).

This first scriptural reference to the battle between Mary and the evil one is called the protoevangelium, or “first gospel.” Its title is significant: rather than focus on the negative reality of evil, it identifies the prophecy about Mary as “good news.” In other words, while evil is real, we don’t have to be afraid, not only because God is more powerful than evil, but also because he has given Mary the particular mission of protecting us.

Mary’s protection doesn’t let us off the hook or guarantee that we won’t be tempted or won’t make bad choices. But it does remind us that we have God on our side, and have constant cause for hope.

We already know the end of the story, and it is victorious. 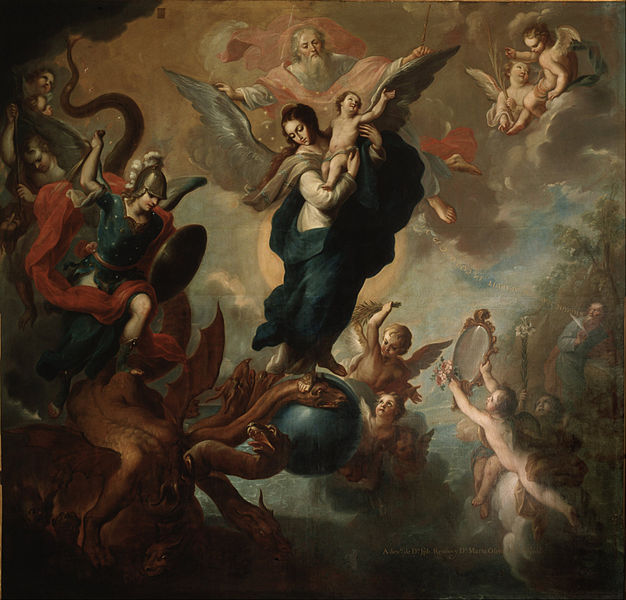