Father and daughter team undertake an unprecedented ‘Walk for Life’ 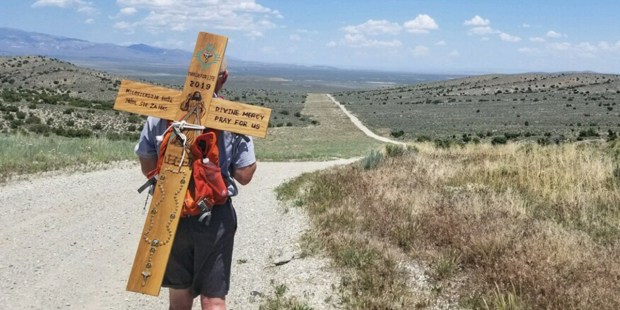 John and Laura Moore are going coast to coast in support of the unborn.

John Moore does the walking part — sometimes more than 15 miles per day across highway and local road, good weather or bad. His daughter, Laura, is the scout. In a camper that Moore bought specifically for this important journey, Laura drives ahead to preview the terrain and to stop to give her father food and water, as told in a story about them in Voice of the Southwest. She stops to collect him at the end of a long day of walking, which started earlier this year in San Francisco and will end in Washington, D.C., on January 18, 2019, for the national Walk for Life.

But Moore, 68, does not look like an ordinary walker on the road — on his back he carries one of two handmade wooden crosses he made for the journey. One of the crosses is a tribute to Father Emil Kapaun, a Roman Catholic chaplain in World War II and Korea, who eventually died as a POW in that country, for whom Moore has a special devotion.

The second cross was crafted with the help of Roberto Gonzalez, a noted Spanish folk artist or santero from Albuquerque, New Mexico, the state where the Moores also live. It features an image of Our Lady of Guadalupe, the patron saint of the unborn.

The crosses encourage passersby to stop and ask Moore what on earth he’s doing, and much of the response he’s received has been overwhelmingly positive. It’s part of what keeps him going, this opportunity to be a “witness for Christ,” even in the rain and hot sun, even on dusty dirt roads that never seem to end.

“I never tire of walking a pilgrimage, and there is never a reason to get discouraged,” says Moore. “Each step is one step closer to Washington, D.C. I always tell people it’s my job to put one foot in front of the other, and the outcome is in God’s hands … To be 68 years old and carrying a cross across the country, I consider myself blessed.”

Moore, a retired teacher who now runs a family business, an RV park, has been walking “with a passion” since he turned 55. He attended his first March for Life six years ago, which inspired him to want to do more for America’s unborn. Before this pilgrimage, Moore had walked several smaller pilgrimages, including the annual Good Friday pilgrimage to Chimayo, New Mexico, 13 years in a row.

It’s not many 25-year-old college graduates like Laura who would give up a year of her life for something like this. But Laura Moore considers this journey her “calling.”

“When God wants something for you, everything falls into place,” she says. “I’m young, single, and this couldn’t be a better time for me in terms of my responsibilities. This is the only thing I am being asked to do at this point in my life.”

One of the most profound encounters she’s had on the road was with a woman named Nancy at the Flying J in Wells, Nevada. She asked about the walk, and shared her own story about why the pro-life movement matters to her: While pregnant with her first child, the baby wasn’t kicking or moving. So the doctor wanted to go in and run a couple tests. The baby was healthy — and he also told her that she wouldn’t believe how hard babies fight when they think they’re being taken from their mothers. She said she is now the mother of a child who is autistic and absolutely amazing.

For Laura, the trip is an opportunity for growth — with a focus on the journey rather than crossing the finish line. And that includes enjoying a lot of quality time with her dad. She and her father have always been close, but it’s been great to spend time together in a lot of small towns, visiting historical sites, museums and Catholic Churches they discover. They get ice cream, see movies, and play checkers and pool.

Laura Moore’s parents just celebrated their 39th anniversary on June 8, even though John was on the road at the time. The entire family is supporting the duo’s journey, and are running the family business while they are on this pilgrimage.

The father-daughter pair are blogging about their 2019 March for Life Pilgrimage on a blog called Crossbearerslog, where followers can keep up on their progress and leave encouraging messages.