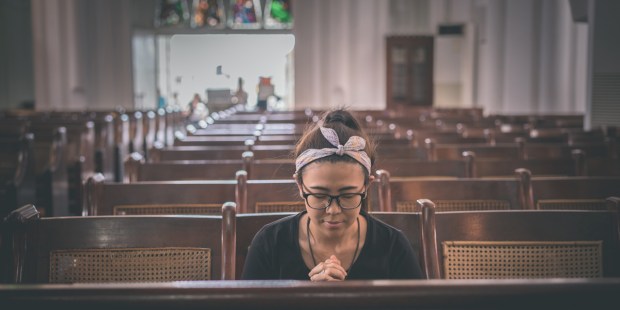 Results of sociological studies in Europe and the United States give cause for concern … and hope.

“We need you young people, living stones of a Church with a young face, but not made up, as I said: not artificially rejuvenated, but revived from within.” With these words, spoken on the occasion of the opening of the pre-synodal meeting of young people on Monday, March 19, 2018, at the International Pontifical College Maria Mater Ecclesiae in Rome, Pope Francis once again emphasized one of the key themes of his pontificate: namely, the fundamental role of young people in the life of the Church of today and tomorrow.

“Dear young people, you are the hope of the Church,” wrote the Pontiff last August in his Twitter message for the United Nations’ International Youth Day, exhorting young people to participate in the preparations for the upcoming Synod of Bishops, which will take place this coming autumn with the theme “Young People, the Faith, and Vocational Discernment.”

In the context of this highly important ecclesial event and of the 34th World Youth day, which will be held in Panama January 22-17, 2019, it’s worth asking what the relationship is like between young generations—including the so-called Generation Z (that is, those born roughly between 1999 and 2015)—and the faith.

Some authors, including American Joan Hope, are rather confident. Hope, in her article Get your campus ready for Generation Z, published in the September 2016 edition of the newsletter The Successful Registrar, says that Centennials or Post-Millennials—as the young people of this generation are also called—are more inclined not only to traditional values, but also to religion.

Other studies belie this optimistic point of view; on the contrary, “there are good reasons” for believing that the teenagers and young adults of Generation Z “will be the most agnostic generation the world has seen since before the Medieval Period.” This, according to the article “Why the Generation Z Population will be Non-religious,” published recently on the American website The Truth Source.

Indeed, a study by the Barna Group, published last January, unhesitatingly defines Generation Z as “the first truly ‘post-Christian’ generation.” A study carried out in partnership with the Impact 360 Institute (headquartered at Pine Mountain, in the state of Georgia) showed that in the United States the percentage of members of this generation that identify as atheists is double that of the adult population: 13 percent vs. 6 percent.

In addition, more than one in three young people of Gen Z (37 percent) believe, for example, that it’s not possible to know with certainty if God is real, compared to 32 percent of the adult population. “For many teens,” the study observes, “truth seems relative at best and, at worst, altogether unknowable.”

Even if they attend a church, that doesn’t mean they aren’t critical of it. Among Gen Z churchgoers, nearly half think that the church “seems to reject much of what science tells us about the world” (49 percent) and more than a third believe it is “overprotective of teenagers” (38 percent). A third of them also think that “the people at church are hypocritical” (36 percent).

Lastly, of the members of Gen Z who say that going to church isn’t important for them, nearly two thirds say that they find God “elsewhere” (61 percent).

On the Old Continent, the situation doesn’t look much better. A study of youth and their relationship with religion in 21 European countries (plus Israel) was carried out by the Catholic Institute of Paris and St. Mary’s University in Twickenham, London, based on data from the European social survey 2014-16. The results have been reported in various publications, including La Croix and The Guardian, and they don’t offer a very rosy panorama. In more than half of the European countries studied—12 of 21—a majority of the young people in the age range from 16 to 29 say they have no religious affiliation.

A co-author of the study, Stephen Bullivant, doesn’t mince his words when describing the general situation. Religion is “moribund,” the theologian and sociologist at St. Mary’s University told The Guardian. “Christianity as a default, as a norm, is gone, and probably gone for good – or at least for the next 100 years.”

Very eloquent, for example, is the situation of the Czech Republic, where 9 out of 10 young adults (91 percent) aren’t affiliated with any confession or religion. The percentage of non-affiliated young people varies between 70 percent and 80 percent in Estonia (80 percent), Sweden (75 percent), the Netherlands (72 percent), and the United Kingdom (70 percent).

Across the Channel, in the United Kingdom, only 7 percent of young adults identify as belonging to the Anglican Church, less than the 10 percent of British youth who self-define themselves as Catholics, and only slightly more than the percentage of their contemporaries who say they belong to the Islamic faith (6 percent).

At the other end of the spectrum, the most religious young people are the Polish (only 17 percent say they are religiously unaffiliated), followed by their contemporaries in Lithuania (25 percent not affiliated with a religion).

In large European nations such as Germany, Spain, and France (the study doesn’t look at the situation in Italy), this percentage is 45 percent, 55 percent, and 64 percent, respectively.

The study also includes some surprising elements, such as the following statistic regarding the Czech Republic. Although Catholic young people constitute merely 7 percent of the population of the ex-communist country, nearly a quarter of them (24 percent) say they go to Mass at least once a week, and nearly half (48 percent) pray at least once a week, reports La Croix, quoting Bullivant. “The example of the Czech Republic is symptomatic of what Benedict XVI defined as ‘creative minorities,'” he explains.

“The new default setting is ‘no religion’, and the few who are religious see themselves as swimming against the tide,” Bullivant told The Guardian. “In 20 or 30 years’ time, mainstream churches will be smaller, but the few people left will be highly committed,” concludes the director of the Benedict XVI Centre for Religion and Society.

Few but good, therefore: a trend that seems to be gaining ground also in Italy. That is the conclusion of a study led by Italian sociologist Franco Garelli and carried out at the Eurisko polling institute with a sample of nearly 1,500 young people in the age range of 18-29, the results of which were reported on the site Vatican Insider.

The study shows, for example, that the percentage of Italian youth who declare themselves to be atheists has risen from 23 percent in 2007 to 28 percent in 2015, while the percentage of “convinced and active believers” has fallen to 10.5 percent. In addition, among the young people who say they believe only because of “tradition and education” (36.3 percent), more than one in five—22 percent—say they don’t really believe in God.

To conclude, one thing is certain: we are facing a possible future scenario that shows once again how crucial and demanding is the challenge that faces the participants in the upcoming Synod.