Cassocks for priests, made out of recycled plastic: The Church and the challenge of pollution 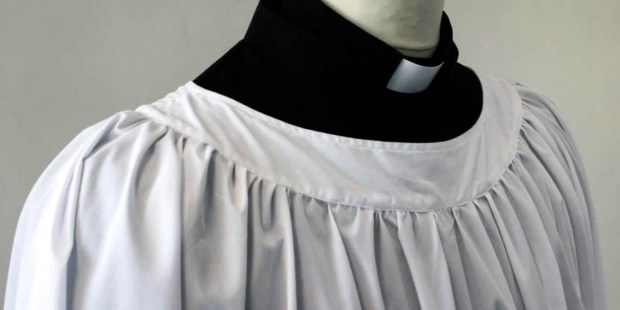 The struggle to preserve creation becomes a more and more concrete ecumenical commitment.

The Church of England has joined the war against plastic.

As The Telegraph  reported on May 26, the clerical clothing manufacturer Butler & Butler has launched the first cassock made from high-quality polyester produced entirely from reclaimed PET bottles.

The clothing company, which specializes in fair trade products, obtains the fabric—which is softer than traditional polyester—from India.

The challenge: To increase awareness

The idea of producing ecclesiastical clothing from recycled plastic was born as a result of the enormous interest inspired last year by the BBC documentary series The Blue Planet II, in which famous English naturalist and host David Attenborough focuses on various aspects of sea life, among which is the impact of human activity and the plastic catastrophe on maritime ecosystems.

Last Lent, the Church of England had already started to promote the anti-plastic campaign, inviting the faithful—as a sort of “ecological sacrifice”—to give up the consumption of plastic products.

According to Ruth Knight, the Church’s environmental policy officer, quoted by BBC News, the Lent Challenge was “about raising our awareness of how much we rely on single-use plastics and challenging ourselves to see where we can reduce that use.”

The Church of England, with its environmental initiatives, is in great company. In fact, in his encyclical letter Laudato Si’, on care for our common home (2015), Pope Francis emphasized the importance of what he calls “education in environmental responsibility” which “can encourage ways of acting which directly and significantly affect the world around us, such as avoiding the use of plastic and paper, reducing water consumption, separating refuse, cooking only what can reasonably be consumed, showing care for other living beings, using public transport or car-pooling, planting trees, turning off unnecessary lights, or any number of other practices” (211).

In addition, on the occasion of the 1st World Day of the Poor last November, the Pontiff met with the founders of the Plastic Bank, David Katz and Shaun Frankson, who have created a system (with the corresponding app) to collect the plastic that has ended up in the oceans and convert it into hard cash for the poorest of the earth.

A mountain of 8.3 billion tons of plastic

Despite its enormous practicality and usefulness in daily life, plastic is a very problematic material from an environmental point of view. According to a study directed by Roland Geyer, from the University of California, Santa Barbara (UCSB), modern man has produced in the course of the past 65 years a mountain of 8.3 billion tons of plastic, of which more than 70 percent—6.3 billion tons—has ended up as waste.

Of this huge amount, every year nearly 8 million tons—on average—end up in the oceans, and this tendency is increasing, according to another study published in February 2015 in the prominent journal Science. In fact, the authors of the study warn that, if nothing is done about it, by 2015, 17.5 million tons could end up in the ocean every year.

The impact of this mass of plastic is enormous. In the seas and oceans of our planet, there are actual islands of plastic, of which the “Great Pacific Garbage Patch” is perhaps the most obvious example.

According to information from the Dutch foundation Ocean Cleanup, this enormous blob of trash which has accumulated half-way between the California coast and the Hawaiian Islands isn’t only three times the size of France, but also up to 16 times more massive than previously thought. While the largest artifacts (20″ in size or larger) make up approximately half of this “soup” (53 percent)—it’s impressive to see images of animals tangled it abandoned fishing nets, or dead after having eaten plastic —the number of so-called microplastic fragments is shocking: 1.8 trillion. There is a very recent case of a pilot whale that died Friday, June 1, in Thailand. As reported by the Daily Mail, veterinarians found more than 80 plastic bags, weighing nearly 18 pounds, in the stomach of the unfortunate animal.

They aren’t only fatal for marine fauna, but they also end up in the food chain, and therefore, sooner or later, on our tables. The plastic catastrophe has also reached the waters of the Arctic Ocean. This has been confirmed by the information collected between the spring of 2014 and the summer of 2015 by researchers from the Alfred-Wegener-Institut (AWI) of Bremerhaven, in Germany, during three expeditions on board the research ship and icebreaker Polarstern. They discovered that in just one liter (approximately a quart) of arctic ice, more than 12,000 microplastic fragments can be hidden. Many are microscopically small, just 11 microns in size, or one sixth the breadth of a human hair, whose diameter varies between 65 and 78 µm.

“The smallest particles can easily be eaten by arctic microorganisms such as ciliates, but also copepods,” warns Ilka Peeken, coauthor of the study and researcher at AWI.

The cancer of the beaches

Another study, this one by ENEA—the Italian agency for new technologies, energy, and the development of sustainable economy—shows that 80 percent of the waste collected on the beaches of the “Bel Paese” is composed of plastic. According to estimates, at least 100 million cotton swabs—the famous little rods with the ends covered in cotton for cleaning your ears—pollute the beaches of Italy.

It’s time to act. This is the conclusion of the European Commission, which on Monday, May 28, proposed a new directive aimed at banning or reducing several of the most common single-use plastic products, ranging from plastic straws for drinks and disposable plastic cutlery, to the previously-mentioned cotton swabs and even the plastic balloon sticks. Meanwhile, measures are also planned to reduce plastic bottles, introducing a deposit/redeem system, and also to reduce plastic fishing nets; it is Brussels’ intention to conclude the legislative process before the upcoming European elections, scheduled for May 2019.

In recent months, both the British Prime Minister Theresa May and the Scottish First Minister Nicola Sturgeon have taken steps to introduce similar bans on the use of single-use plastics.