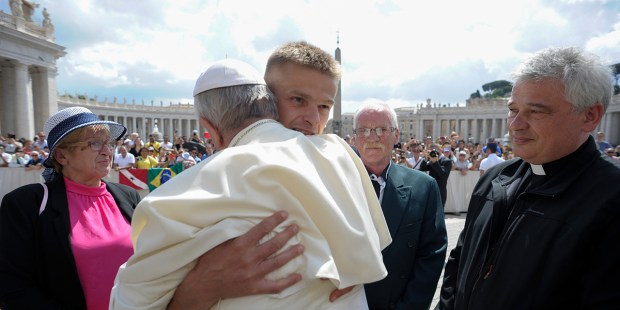 Pope Francis today embraced a man who spent 18 years in prison for a crime he didn’t commit.

Tomasz Komenda was exonerated in March by the Supreme Tribunal of Poland. Nearly two decades ago, he had been found guilty of raping and killing a 15-year-old girl. New forensic evidence led to his release.

Komenda, 42, visited the Vatican with his parents and a priest-friend of the family, on pilgrimage to the tomb of St. John Paul II.

Pope Francis listened attentively to Komenda’s story and then embraced him intensely.

The Komenda family is seeking an economic settlement with the government of Poland, and trying to help Tomasz as he seeks to reintegrate himself with society.