The Cathedral of St. Patrick, an imposing 19th-century structure whose Gothic pinnacles stand proud amidst the towering skyscrapers of midtown Manhattan, is New York’s main Catholic church and one of the most renowned symbols of Catholicism in America. Located on Fifth Avenue between 50th and 51st Streets, it was built between 1858 and 1879 (when its doors were finally opened) to provide a new space of worship for the fast-growing New York Catholic community.

Have a look at these beautiful images: 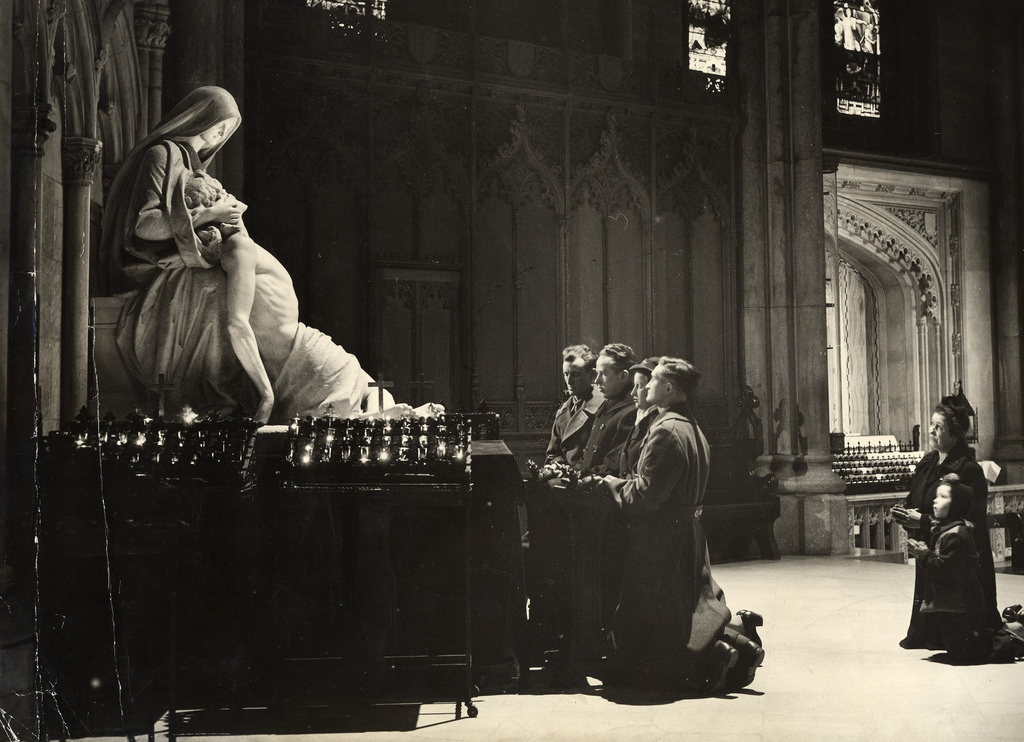 At the time, this part of Manhattan was a far cry from the concrete jungle it is today. Most business and institutions were based in lower Manhattan, where Old Saint Patrick’s, New York’s first Catholic cathedral, still stands.

So when in 1853 Archbishop Hughes announced his intention to build a brand new Cathedral in the “near wilderness” of midtown Manhattan he was not spared from criticism—some called the proposal “Hughes’ Folly.” But the Bishop persisted in his vision and went ahead with construction, betting that one day part of the island would be “the heart of the city.” The first stone was laid in 1858, but work was soon forced to halt due to the Civil War. Construction resumed in 1865 thanks to the contributions of thousands of impoverished immigrants, who pitched in what they could, as well as the more substantial contribution of 100 prominent New Yorkers who pledged $1,000 each.

The Cathedral, designed by American architect James Renwick, Jr., according to Gothic Revival style, finally opened its doors in 1879 and was consecrated to St. Patrick, patron saint of the Irish—the most prominent Catholic group at the time. One newspaper described the new structure as “the noblest temple ever raised in any land to the memory of Saint Patrick, and as the glory of Catholic America.”

Soon after the inauguration, the Archdiocese ordered additional work in order to reflect the importance that the Virgin Mary had for local believers. It was decided to enlarge the east end of the Cathedral by annexing a new “Lady Chapel,” which would be dedicated to the Blessed Mother. Work started in 1900 and the first Mass held in the Chapel was celebrated in Christmas of 1906. The blue and red stained glass windows that now adorn the Lady Chapel were added in 1912 and 1930 thanks to the craftsmanship of English stained-glass artist Paul Vincent Woodroffe.

But that is not the only space dedicated to the Virgin Mary inside St. Patrick’s Cathedral. Rather, her presence is found throughout the interior design of church, from the moving marble statue of the Pieta, located just before the Lady Chapel, to the set of stained glass that runs on the left side of the main aisle, whose designs represent salient episodes of Mary’s life.

And in recent years, her presence has been enforced by the creation of two lateral altars dedicated to two of her most unique icons .

On the right nave, shortly after the middle entrance of the Church, we find the altar of Our Lady of Guadalupe, which can be easily recognized by the iconic “starry cloak” worn by the Virgin and the aureole of light surrounding her entire figure.

Named as the “Queen of the Americas” by Pope John Paul II, the Virgin of Guadalupe is said to have appeared in front of St. Juan Diego Cuauhtlatoatzin, an Aztec who converted to Christianity, to ask for a church to be built in her honor on the site of a former Aztec temple on the Tepeyac Hill, in the north part of Mexico City.

The shrine is particularly dear to the local Hispanic community, whose fervor can be witnessed every year on the Feast of Our Lady of Guadalupe, December 12. On that occasion, thousands of believers gather at Saint Patrick’s to attend a Mass in her honor and to join the street parade that starts after the ceremony. In 2008, a replica of the image of the Virgin Mary which is believed to have been miraculously left on Juan Diego’s cloak or tilma traveled all the way from the Roman Catholic Basilica of Mexico City to New York’s St. Patrick’s Cathedral.

“It’s indescribable what you feel when you’re walking with her, knowing that she came all the way from where your roots began,”Jose Reyes, a New York Catholic who joined the celebrations, told the New York Times.

On the opposite side of Our Lady of Guadalupe’s chapel we find an altar dedicated to Our Lady of Częstochowa, a rare icon of the Virgin which is especially dear to Polish believers. Also known as a “Black Madonna” for the dark complexion of the Virgin, this icon has deep roots that go all the way back to the time of the Apostles. Legend has it that it was created by St. Luke the Evangelist, who painted Mary as she recounted him the tales the he would later feature in his Gospel.

The icon was said to have traveled from the Holy Land and eventually come into the possession of to the Kingdom of Poland some 600 years ago. Her most famous representation is currently held at the Polish monastery of Jasna Gora, but other icons can be found in archdioceses with a strong Polish presence, as in the case of New York. The one showcased in St. Patrick’s Cathedral is not hard to recognize. The dark tones of the icon contrast sharply with the bright white of its marble altar, making it easy to spot.

Every year, the Polish community of St. Patrick’s gathers for two important events: the Pulaski Day Parade Mass, a celebration of Polish heritage in the US held in October, and the commemorative concert in honor of Pope St. John Paul II, usually held during April.

And of course the most important space dedicated to the Virgin is found at the eastern tip of the Church, where her dedicated chapel was built. The Lady Chapel was designed by American architect Charles T. Mathews according to 13th-century French Gothic style, complementing the slightly heavier northern Gothic style chosen by Renwick in the original cathedral design.

And thanks to the recent installation of sound-absorbing glass walls, the chapel now offers a near-silent sanctuary in which to venerate the Virgin. As Archbishop Hughes had predicted, St. Patrick has become an oasis for prayer and contemplation right in the middle of bustling Midtown Manhattan.