How to make confession easier 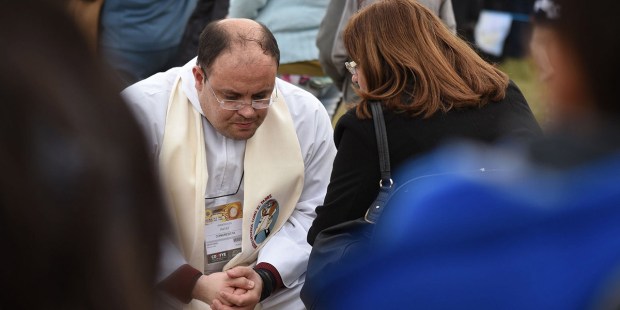 Don’t look at just one facet of it, when there’s a promise of something so great at the end.

Someone once asked a writer if he liked writing. “I like having written,” he said. That’s the way I usually feel about confession. I want to go, but I don’t want to go. It’s not my idea of a good time. I felt that until just the other day I realized I was looking at it wrong. I was looking at one side of confession and not the other.

Once I kneel down and get started, it gets easier as I go along. It’s like trudging up the slope and then sledding down. But I really like walking out afterward. That’s one of the world’s great feelings. I feel clean, of course, but more, I feel light. As if it’s now easier to walk and stand up straight. And I feel that the world is brighter, that the sun came out while I was in the box.

Why is it so hard to go?

So why can it be so hard to go? Why can a trip to the confessional feel like a trip to the dentist? Or a trip to the mechanic when your car has 250,000 miles on it and makes lots of funny noises?

I think many of us think of confession primarily as a cleansing. Which sounds great. The challenge is that it’s a cleansing not in the sense of getting rinsed off by a guy spraying warm water on you. It can feel more like being scrubbed down with steel wool. At least for me, and I’m sure others feel the same way.

My friend Fr. David Poecking, for one. He wrote a very good article about confession from the priest’s point of view in Ethika Politika called “Christ Tears Off Our Scales.” He used the story of Eustace being “de-dragoned” from C.S. Lewis’s The Voyage of the ‘Dawn Treader.’

Eustace, he wrote, represents the typical sinner. If you’ve read the story, you’ll remember that he’s an exceptionally unpleasant human being. You probably enjoyed seeing him turn into a dragon. Justice had been done. Even as a human being, he’d been a dragon inside. And (alas) that would be you and me. If you’re not a dragon, you’re a snake or a worm or a virus or an orc or a troll.

Aslan will heal Eustace in a well of magic water. For free. It’s all grace, as we would say. But first, Aslan must free Eustace of his dragon scales, “lest the rough, hard skin simply slough off the water. Just so, sin impedes our reception of grace. We may immerse ourselves in Scripture or the sacraments, in prayer or study, in service or sacrifice, but our immersion avails us little if we are too well insulated by the scales of unacknowledged, unrepentant sin.”

Of course Aslan’s ripping off the scales is all grace, even though, as Eustace says, “it hurt worse than anything I’ve ever felt.” He needs desperately to be skinned alive, but he can’t do it himself. And which of us could? He pulls off one layer and just finds another.

Fr. Poecking continues: “To heal us, to perfect us, the Lord Jesus is willing to dig more deeply into us than we would ever dig into ourselves. Where we might gloss, ‘At least I didn’t murder anyone this week, at least I didn’t commit adultery,’ he judges our every angry word tantamount to murder, our every lustful thought tantamount to adultery.”

So that’s a downer. It isn’t, really, but it can sure feel like it.

Another way of seeing it

I still love the idea of a spiritual and moral cleansing. I just wish it didn’t require the de-dragoning first. I don’t like seeing the dragon in myself. And then just the other day I realized that I was focusing on only half the thing.

Confession also restores a friendship. It brings me back to Someone I can’t live without. “Well, duh,” you may say, “it’s right there in the prayer of contrition.” OK, yes, but people see different things at different stages.

The prayer tells me that I go to confession not just “because I dread the loss of heaven and the pains of hell.” That’s the part I saw, the de-dragoning part. It reminds me that I go “most of all because they offend Thee, my God, who art all good and deserving of all my love.”

I felt that at the end of confession, but I didn’t really think about it going in. I thought mostly about my sins. Of course restoring a friendship isn’t easy. But the promise of being close friends again makes the prospect of being skinned alive a lot easier