Creation is “groaning in travail,” but for what? 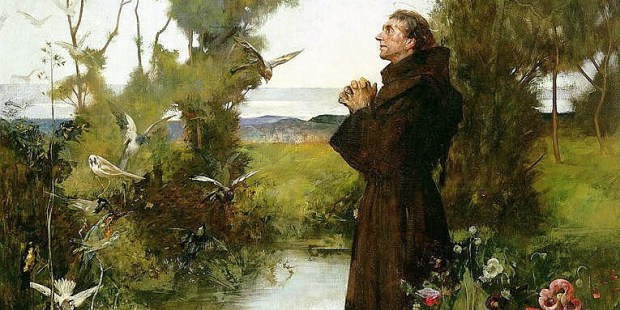 By the fall of man the whole world was drawn into Adam’s ruin.

“Being a man of very great fervor and great tenderness,” St. Francis stopped on his way through the Spoleto Valley to see a crowd of birds (Vita Prima, 58). Surprised “that they were waiting eagerly for him” and “did not rise in flight,” Francis “humbly begged them to listen to the word of God.” The audience, it seems, was as much their idea as his. And having this time admonished them “to praise your creator very much and always love him,” Francis resolved to do so ever again, and in each case, he saw “that they listened to the word of God with such reverence.” They were, we might say with St. Paul, “waiting with eager expectation for the revealing of the sons of God” (Rom 8:19).

In a way made possible only by grace, we see Francis directing the natural world to the praise and glory of God. It bears a resemblance to our “directing” of bread and wine in the Eucharist: “fruit of the earth and work of human hands, it will become for us the bread of life.” It is part of the priestly vocation—a vocation shared by all the baptized—to perform this same task for the whole of the created order, to direct all things to the praise of God. As the great Orthodox theologian Alexander Schmemann writes

The first and basic definition of man is that he is the priest. He stands in the center of the world and unifies it in his act of blessing God, of both receiving the world from God and offering it to God—and by filling the world with this eucharist [=“thanksgiving”], he transforms his life, the one he receives from the world, into life in God, into communion with Him. The world was created as the “matter,” the material of one all-embracing eucharist, and man was created as the priest of this cosmic sacrament.

Schmemann does not mean, of course, the literal placing of all things on the altar but rather the drawing of all things into the act of thanksgiving. So it was that the birds—joyful at the glory they possess and so proclaim—“began to stretch their necks [and] extend their wings” when Francis told them how God “gave you feathers to clothe you, wings so that you could fly … [and] a home in the purity of the air.” In Francis we see the right celebration of this “cosmic sacrament”—the right exercise of that priestly “dominion” (Gen 1:26, 28) given to man at the first.

Creation’s “waiting with eager expectation” (Rom 8:19) has as its first object, however, an end to exploitation. By the fall of man, in which all things were directed not to God but the self, “the world … was drawn into Adam’s ruin.” As Joseph Fitzmyer explains, “through Adam came not only sin and death (Gen 5:12-14), but ‘bondage to decay’ and the ‘slavery of corruption,’ which affect all material creation, even apart from humanity (Gen 8:19-23).” And this bondage to decay is only worsened by the continuation of sin. With exactly this is mind, Pope Francis speaks of creation’s groaning at the beginning of Laudato Si’:

This sister now cries out to us because of the harm we have inflicted on her by our irresponsible use and abuse of the goods with which God has endowed her. We have come to see ourselves as her lords and masters, entitled to plunder her at will. The violence present in our hearts, wounded by sin, is also reflected in the symptoms of sickness evident in the soil, in the water, in the air and in all forms of life. This is why the earth herself, burdened and laid waste, is among the most abandoned and maltreated of our poor; she “groans in travail” (Rom 8:22). We have forgotten that we ourselves are dust of the earth (cf. Gen 2:7); our very bodies are made up of her elements, we breathe her air and we receive life and refreshment from her waters. (Laudato Si’ §2).

If, then, creation “awaits with eager longing the revealing of the sons of God,” it is first a longing for freedom from “bondage to decay.” But in the last instance it is a longing for the “glorious liberty of the sons of God” (Rom 8:21), by the grace of whose priesthood creation itself might be freed to “praise your creator very much and always love him” (Vita, 58). In this way, all things will be united in Christ, things in heaven and things on earth (Eph 1:10; Jn 12:32). But until that time and the “coming of our Lord Jesus with all his saints” (1 Thes 3:13), creation remains in corruption and decay, “groaning in travail” (Rom 8:22).

Read more:
When you’re hurt too badly to pray, let the Spirit do the groaning