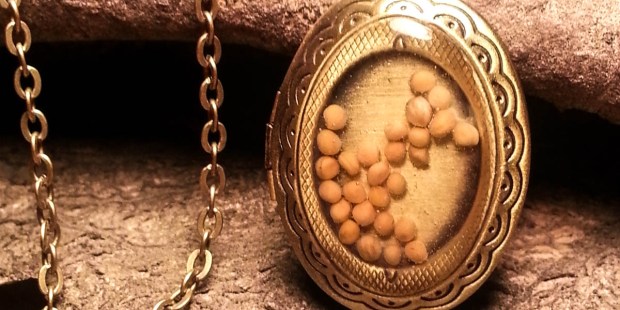 We don’t always get to see fruits. But sometimes we do …

In the Gospel this Sunday, the 11th Sunday of Ordinary Time, Jesus tells the story of grace that Christians have seen repeated again and again in life.

“To what shall we compare the kingdom of God?” Jesus asks. “It is like a mustard seed that, when it is sown in the ground, is the smallest of all the seeds on the earth. But once it is sown, it springs up and becomes the largest of plants.”

This makes me think of my wedding.

Looking back over my life, I see how the tiniest seeds of fidelity grew into giant trees of faith.

In 1980s Tucson, I had stopped practicing my faith when I ran into an old friend. In only one meeting with me, she strongly — and very persuasively — encouraged me to join a Catholic Great Books program in San Francisco.

Meanwhile, in 1980s Orange County, a staff member at an unlikely parish promoted the program to a girl named April.

We met there and discovered our faith and each other — we got engaged and April invited everybody she knew to our wedding.

In 1930s Tucson, a Catholic boy had explained the Hail Mary to a Protestant friend. The friend was fascinated. He became Catholic, became a priest — and at our wedding gave the most relatable, powerful homily about the indissolubility of marriage I have ever heard in my life.

Many people told us how meaningful the homily was to them. One married couple told us that after hearing it, they canceled their planned separation and decided to work things out. A young woman who had left the faith was moved by the wedding to seek instruction from that priest, and is now the mother of a large Catholic family. A young man who had drifted from the faith told me that wedding was a turning point in his life; he is now a priest.

A boy explaining a prayer, two people promoting a Catholic program, a bride-to-be inviting everyone she knew to her wedding, a priest delivering bold truths gently — each deliberate small act of faith had enormous consequences.

But maybe my favorite mustard seed story of all time had nothing deliberate about it.

I got a strange call in my Connecticut office years ago. The voice on the other side said, “Is your wife that woman who walks to Mass with her children?”

“My sister always talks about how impressed she is seeing her, and my sister is in real trouble right now. Can I give your wife her phone number?”

My wife ended up offering consolation and direction to the woman over the phone — but she had done nothing at all to evangelize her. All she had done was stay faithful to daily Mass, not even trying to be noticed.

God takes even our small acts of fidelity and makes them grow.

To make your own mustard seed story, all you need is a little faith and a lot of patience.

As the First Reading puts it, the Kingdom of God has always been a “lowly tree” that grows unexpectedly high.

You see it in the manger, where God’s answer to the problems of the world was a tiny baby.

You see it in Cana, where Jesus’s kindness at another wedding set a cascade of events in motion that ended in his saving death.

In every case, a small act plants a seed and then, as Jesus puts it, “Of its own accord the land yields fruit, first the blade, then the ear, then the full grain in the ear.”

It takes painstaking patience to wait for seeds to grow.

Usually, we don’t even see the end product.

You will likely never see the tree that comes from most of the seeds you plant. As Paul puts it in the second reading, “We walk by faith, not by sight.” Sometimes, he says, you only see the fruit when you are at the judgment seat of God.

God is making more out of them than you can imagine.

Read more:
How a handyman showed me the contagious power of goodness