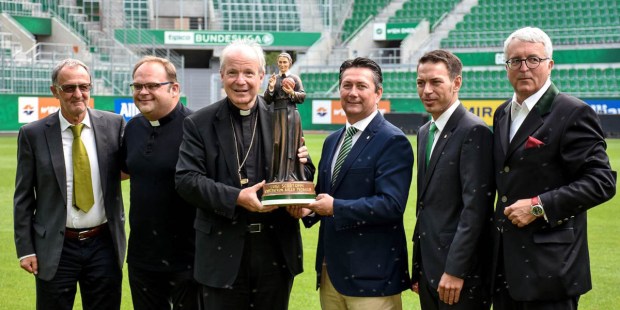 Footballers all around the world look to Scrosoppi for inspiration and intercession.

While St. Sebastian is widely known as the patron saint of sports in general, until recently there didn’t exist a specific saint for the popular sport of soccer (more widely known as football). In the past several years a fan of the sport decided to take the matter into his own hands and began researching saints to find one who would be a good fit.

According to Zeit Online, Austrian businessman Manfred Pesek recognized the void and assembled a team to figure out how they could nominate a saint for football. Together with two university professors they examined thousands of saints for suitability. Their criteria hinged on specific virtues that should be emulated in the sport of football and a special ministry with children.

After narrowing down the list to their top 10, the lot fell on St. Luigi Scrosoppi, who was canonized by St. John Paul II on June 10, 2001. They saw him as a perfect fit: a saint who loved children, displayed the extraordinary virtues of charity and patience, and possessed a joyful spirit.

John Paul II said about him in his canonization homily, “Charity was the secret of his long and untiring apostolate, nourished by a constant contact with Christ, contemplated and imitated in the humility and poverty of his birth at Bethlehem, in the simplicity of his life of hard work at Nazareth, in the complete immolation on Calvary, and in the astonishing silence of the Eucharist.”

Scrosoppi was especially attentive to orphan girls in the area and young men attending the Udine seminary. He worked zealously for the poorest among them and helped them find hope in the midst of their difficult situation. According to Rome Reports, he was also known “for his dedication to youth through sport.”

Pesek then received support from Bishop Alois Schwarz (then bishop of Gurk), Bishop Andrea Bruno Mazzocato (bishop of Udine) and the “Church and Sport” section within the Pontifical Council for the Laity.

The official announcement was made on August 22, 2010, with the presentation of a newly commissioned statue that featured Scrosoppi holding a football. The statue was later also presented to the Italian national team. Bishop Schwarz said during his homily at the special occasion, “Finally, all football players, stadiums and football fans around the world now have a patron saint they can call!”